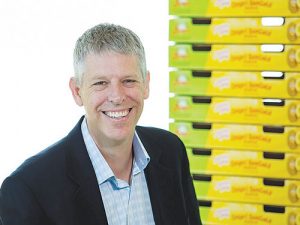 However, the industry has bounced back strongly; capital values have soared higher despite Psa lingering in orchards.

Jager, who spoke at a recent dairy industry conference in Waikato, described the outbreak in late 2010 and the following few years as “pretty dark times”.

He told the Smaller Milking and Supply Herds (SMASH) conference that the Psa bacteria which kills kiwifruit vines wiped out Zespri Gold kiwifruit; production slumped from 30 million trays a year to 10m trays.

Jager says many kiwifruit growers were forced to find jobs to support their families.

“During the whole period there was one bankruptcy and no one committed suicide,” he says. “There was a huge focus on R&D and collective pulling together of the industry.”

Tests done on Psa-affected kiwifruit showed the cheaper Green Hayward variety “pretty tolerant but the Gold variety intolerant”. However, Zespri Gold growers could not go back to growing the Hayward variety.

“If you are a Gold kiwifruit grower, your income levels are much higher than the Green kiwifruit growers; you couldn’t go back to growing green… the financial case wouldn’t work,” says Jager.

But the kiwifruit industry enjoyed “a huge dollop of good luck”. Another Gold variety developed earlier -- Zespri SunGold – was found to withstand the bacteria much better than the Zespri Gold variety.

Backed by the banks, the industry planted 2000ha of SunGold kiwifruit.

Jager says it worked “splendidly”. “The SunGold kiwifruit works well; it has a higher yield than the old Zespri Gold, bigger fruit and a broader taste appeal.”

Jager says the kiwifruit industry realises that now it is obliged to farm in the presence of Psa bacteria.

The industry has pulled resources together and the result is higher productivity from orchards since Psa.

While the higher yields could be technical -- the impact of Psa causing stress in the vine and causing more floral behavior -- Jager says better orchard management could also be the reason.

“Ironically we are more positive than we were before Psa but that should never undervalue the pain and struggle people went through in the Psa environment.