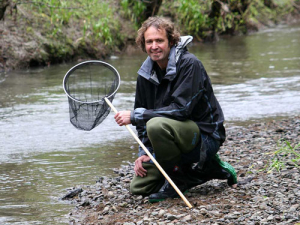 Speaking at the Beef + Lamb NZ’s Environmental Conference, last week, Joy claims the power that the dairy industry holds over the nation has made it harder for people to question some of its behaviours.

“If you say something against dairy it’s like saying something against rugby or Richie McCaw – simply don’t dare say it. Dairy, pardon the pun is a sacred cow. Nobody is game to say anything about it and we turn a blind eye to so many impacts of it. People won’t speak because of the response they will get.”

Joy says this has become evident in Environment Waikato’s Plan Change One, which has adopted the concept of grand parenting nitrogen leaching. He says the pollution rights have been given to the existing polluters, which disadvantages sheep and beef farmers.

Meanwhile, Joy has also pleaded for farmers to fence off small streams. He claims the present system of fencing off larger streams was wrong and that focus should be on the small ones, which feed into these.

Under the Sustainable Dairy Water Accord, streams over a metre wide and 30cm deep have to be fenced off and it’s claimed that 96% of these have been done. But Joy says fencing these isn’t as effective as it might seem and believes some farmers apply the rules to suit themselves.

“When people apply that rule about the metre and 30cm, they generally apply it where it suits them and this relates to the width of the stream and also the depth,” he claims.

“Last time we looked at an area and said let’s have look and monitor what is happening; it seems that most streams didn’t have to be fenced because they didn’t meet the criteria. In my view, we should be fencing all the little ones.”

Joy also has problems with science being politicised. He says all the money is with the government and industry who are promoting intensification. He claims that work which gets commissioned by individuals or councils and doesn’t suit them (industry or government) doesn’t see the light of day. However, he concedes that the role of a consultant is to meet the needs of the needs of the person who is paying for the work.

ETS changes a ‘slap in the face’

Farming groups have described the newly passed emissions trading reform legislation as a ‘slap in the face’ that will not reduce the country’s carbon emissions.

ETS changes a ‘slap in the face’

Farming groups have described the newly passed emissions trading reform legislation as a ‘slap in the face’ that will not reduce the country’s carbon emissions.