Dairy is not evil 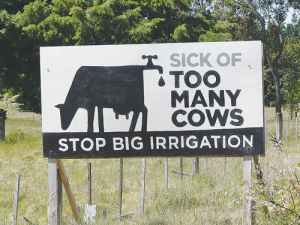 It's about land management, not the number of cows.

Irrigation New Zealand chief executive Andrew Curtis believes there will always be a place for dairy.

“I keep saying it: it’s not about too many cows, but how the land is managed,” he told Rural News.

“So, let’s stop going on about the land use thing because it’s all about land management practices,” says.

Curtis has seen “a lot of fuss” over the dairy development of the Simons Pass Station in the Mackenzie.

“But, having seen that development, they’re retiring an awful lot of that land. And that land’s going to be well-managed; so instead of it being pine-infested, heiracium-infested, rabbit-infested — as much of it is at the moment — they’re going to set aside management funds to restore that properly.”

IrrigationNZ has submitted feedback on the Water Services Bill this week to seek protection of small drinking water users in rural areas.

Four New Zealand farmers have been selected as finalists of the inaugural Zimmatic Sustainable Irrigation Awards.

Irrigation New Zealand is calling on whoever forms the next government after September 20’s election to join with it to develop a national water strategy for the country.