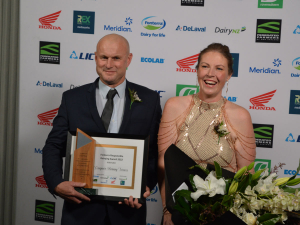 The winner of the 2022 Fonterra Responsible Dairying Award has been commended for its focus on adapting individual farm systems to the land, resources and staff.

The prestigious award was introduced by NZDIA  and Fonterra to recognise dairy farmers who demonstrate leadership in their approach to sustainability and who are respected by their fellow farmers and their community for their attitude and role in sustainable dairying.

“It was a privilege to engage with all three finalists and the quality of the presentations was exceptional,” says head judge Conall Buchanan.

“The future of the industry feels in such good hands when you are able to spend time with people like our finalists.”

“It’s encouraging and motivating and you wish you could send them out around the country to speak to all farmers because we left the room energised by what they had to say.” Rutherford says.

While all the finalists were impressive, the winning entry represented by Stuart Taylor, general manager farming and Caroline Amyes, agri relationship partner, stood out due to Craigmore’s focus on adapting individual farm systems to the land, resources and the people involved.

“This is a strength that our industry will increasingly use in the years ahead,” say the judges.

One of Craigmore’s philosophies is that there is no single perfect system.

“Craigmore begins with the people that are going to be on the land and their motivations and goals for the land and animals.

“People influence the system that the farms adopt because the passion and drive was linked to the people that were running the farms,” says judge Melissa Slattery.

The judges were impressed at Craigmore’s philosophy of adapting the farm system on each one of their 22 farms to suit the environment and the people.

The judges say Craigmore are demonstrating and implementing new technology that’s proven to function in a way that achievable and realistic for other farmers.

"Craigmore are leading change and using different innovations on different farms to help create solutions that other farmers could then use, including dung beetles, working on their significant natural areas, a composting barn, boluses and are trialling Halter on one of their farms,” say the judges.

“Just like every farmer, Craigmore are on a journey and are continually seeking ways to grow and challenge themselves.”

An opportunity to connect!

New Zealand 2022 Share Farmer of the Year Will Green says it's a huge honour to be recognised in such a competitive industry.

Two brothers who moved from India to make a career in New Zealand agriculture sector have created history by winning the 2021 New Zealand Share Farmers of the Year title.