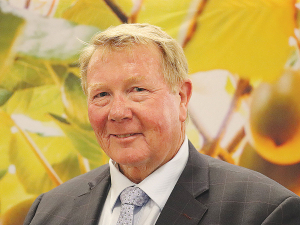 The kiwifruit variety SunGold is this season set to overtake the traditional green Haywards variety for the first time.

Zespri chairman Bruce Cameron told Rural News that 79 million trays of SunGold will be sold this year versus 70 million trays of Haywards. This marks a “huge breakthrough” for the industry because it was SunGold that “rescued” it from the ravages of PSA in 2010, he says.

It’s great news for New Zealand because Zespri holds the plant variety rights for SunGold but not for green kiwifruit.

“Whilst we put a lot of promotion and marketing into green kiwifruit, we don’t hold the IP for Hayward green and we are competing with the Chileans and Australian’s in the northern hemisphere,” he told Rural News.

On top of SunGold now dominating, Zespri expects kiwifruit exports to be closing in on $5 billion by 2025, Cameron says.

“We are sitting at about $3b now in 2019 and our growth projections based on the 700ha we will release for the next three years will produce revenue of about $4.5b.”

The growth is part of a planned Zespri strategy dating back to the PSA days -- not a commodity bubble. While Zespri is reaping the financial benefits of SunGold, it is not resting on its laurels and will trial a new variety of red kiwifruit in NZ and Singapore. Red kiwifruit are relatively easy to grow but the challenge has been to  develop a red variety with a sufficiently long shelf life.

“It’s a different fruit to handle as opposed to SunGold, but I think the challenge we have as an industry is to overcome those. It could be three to five years before we have faith in it and understand its behaviour through the supply chain.”

In Asia, where the fruit is likely to be exported, red is a lucky colour. “So any red kiwifruit is looked upon as a very lucky fruit.”

The kiwifruit industry’s future looks good and it gets many accolades, Cameron says.  But it must remain vigilant and is constantly analysing risks on- and offshore. Biosecurity and proper handling of kiwifruit on the home front can result in problems in markets.

“It’s not just the trade war between the US and China,” he says. “We are cognisant of that and other geo-political issues, but there is a full matrix of issues we are analysing and keeping our ears to the ground on.”