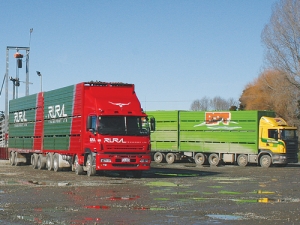 Transport firms are coming under increasing scrutiny over carting livestock not fit for travel.

He adds that farmers should not be surprised if transporters refuse to take animals that are not up to scratch, as MPI has been giving transporters a strong message.

“It really is the farmer’s responsibility to make sure those cows are fit and healthy before transport,” Leach told Rural News.

“They should not be surprised, if they are presenting animals that aren’t fit, that the carrier may say they are sorry, they are not able to transport those animals.”

“It is quite understandable that when farmers see the culls going up the load ramp onto the truck and off the farm, that from their perspective that animal is no longer their concern. The reality of it is they are still legally responsible for that animal.”

Leach says the key message to farmers this year is that they must communicate well with the transporters and make sure they plan ahead so the cows are prepared for transport. Those animals need to be fit and healthy.

“Cows which have been dried off just before transport are at particular risk of metabolic diseases. Some prior planning is needed to dry those cows off. Either dry them off early or milk immediately prior to transport. The likelihood of having metabolic issues is then greatly reduced.”

Cows need to have sufficient body condition score, be fit and healthy, able to stand and bear weight on all four limbs and have no health issues that will compromise them through the added stress of transport.

DairyNZ is seeing cows maintain condition this year. “We are on track to see some good condition animals around,” says Leach. “This last rain and a flush of grass is maintaining condition. Farmers generally are more proactive in trying to aim for those condition scores so they are hitting those targets of condition score 5.0 for calving.

“So, generally, farmers are doing a great job keeping animals in good condition.”

The Ministry for Primary Industries (MPI) is calling for research proposals for projects to investigate regenerative farming practices.

Post Covid, Ray Smith, director general of the Ministry for Primary Industries (MPI), says there is a big opportunity to take our primary product to the rest of the world.