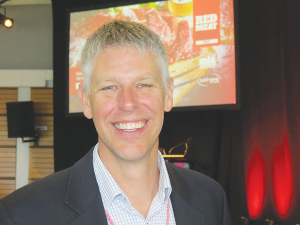 Pressure on farmers from climate change – both from the changing climatic conditions and reducing emissions – will only increase, says Primary Sector Council chairman Lain Jager.

The 16-member council has been tasked with creating a pan-industry vision that balances economic opportunity with environmental concerns. Jager says they have been operating under the radar since their inception in April last year and will continue to do so for three to four months.

After that industry leaders may be able to take some ideas out to the sectors. The council is due to wrap up by April next year.

The council has been looking through a strategic lens at the food and fibre sector including a situation analysis by Paul Dalzeil, professor of economics – agribusiness, Lincoln University.

“The first idea is that the food and fibre sector is hugely important to NZ. It is not a sunset industry,” Jager told the ProteinTech19 conference in Auckland.

Export revenues have been growing at about 4% a year over the last 10 years.

“But looking at the future, it is very important the sector continues to grow at about 2%.” That is the Treasury forecast for the growth of NZ’s economy, he says.

“NZ has historically been a bio-based economy and is likely to remain so into the future. However, where and how we grow is of fundamental importance.”

Of our 14m ha we are hugely invested in ruminant protein. NZ has 8.5m ha in sheep and beef, about 1.7m ha in dairy, and about a 1m ha in some sort of farm forestry and 1.8m ha in canopy forestry.

He says the “sexy” high value industries wine, kiwifruit and pipfruit, from a land use perspective, occupy a very small space – less than 100,000ha out of 14m ha.

“On the one hand that represents an enormous opportunity, on the other hand all three of those businesses are demand constrained. They have been growing at roughly 10% a year for the last decade and they can’t grow any faster. And they are a very small sliver of our land use,” Jager explained. That means sheep and beef and dairy are absolutely an important part of this equation and we really need to think about the future of those industries.”

From the perspective of return per hectare the sectors are vastly different. Some produce much more in export lines. Meat in particular is problematic on a returns per hectare basis.

“It has very low margins and that has implications for the resilience of that sector through the change ahead. However, as I have said, the meat sector is hugely important to the NZ economy today.”

The sectors are growing at different rates. Wine, kiwifruit and pipfruit are all growing at 7-10%. Dairy has been expanding rapidly, driving very strong growth, and forestry too has been growing quickly. Meat has been much more challenging over time.

What farmers are currently doing must shape the discussions needed, Jager says.

“Farmers aren’t stupid – they tend to have their land in the use which is most economically viable for them taking into account the class of land.

“If you want a farmer to change land use probably they are going to have to spend money and take risks. You won’t do that as a farmer unless you have something better to go to.”

Any talking about alternative land use must take into account the options people have.

“It can’t be just on the regulatory side. It also has to be on the opportunity side so investment is hugely important.”

OPINION: In theory everyone is happy with the deal struck between the Government and the agricultural sector over emissions.

Agriculture Minister Damien O’Connor is predicting huge international demand for a native seaweed if research proves its worth as a potential methane buster for agriculture.