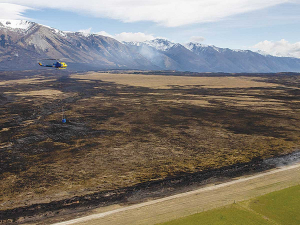 A fire at Pukaki Downs, in August, burned through 300ha of DoC land. Meanwhile, the big Lake Ohau fire this month took out many homes in the Lake Ohau village and tore through another 5000ha – both farmland and DoC estate.

Federated Farmers blames the ferocity of both blazes on the vegetation load of ungrazed DoC land, saying fire risk is being mismanaged and neglected, and needs urgent review.

“It’s not even fire season and we have lost almost 50 homes and over 5000ha because of fire,” Federated Farmers high country chair Rob Stokes told Rural News.

He says some areas of the DoC estate were inappropriate for livestock, but in less sensitive areas, low numbers of sheep or cattle can keep combustible grass, scrub and immature wilding pine levels down.

Conservation Minister Eugenie Sage responded to this call suggesting farmers were opportunistically looking for free grazing. Stokes dismissed this as “a cheap shot.”

He says the Feds had been warning about fuel loads on DoC land for years.

“We have only been opportunistic in the sense that the near-miss to human lives, not to mention the stock loss and serious property damage from the Ohau fire, was a chance to finally get some traction with the department and the Government on this issue.”

Despite the uncertainty around the general election, Stokes expects to continue discussions.

“We hope it’s sorted out this spring.”

“Reducing the occurrences of fires around high-value sites, residential and commercial structures is a key concern for all parties,” he says. “A range of potential solutions were explored, including active management of physical hazards, and an ongoing public awareness campaign about fire risk across New Zealand.”

Reddiex claims DoC, LINZ and Federated Farmers are working collaboratively with Fire and Emergency New Zealand on these matters.

Stokes believes destocking high-country farms for conservation purposes had not been thoroughly thought through. He says passive grazing, in the past, had significantly reduced fire risk and also enabled landowners and leaseholders to manage pests while preserving open landscapes.

The immediate past chairman of the Feds’ High Country group, Simon Williamson, told Rural News the Lake Ohau fire had obviously been “pretty hot” where it went through ungrazed DoC land.

“You only have to go up there and have a look to see that the bits that were grazed haven’t been nearly as badly affected as those that haven’t.

“We’ve never said that grazing will stop fires, but it’ll help a helluva lot with the issues that go on when there is a fire.

“Anywhere it’s been closed up with all that fuel loading underneath it, it’s burnt really hot and savagely whereas if you graze underneath it and take that fuel out of it, they [fires] do brush through and everything is more likely to survive underneath it.”

Williamson’s own property, Glenbrook, is about 20km from the fire but was potentially threatened when it got into the neighbouring Ohau Downs property at the bottom of the lake, he said.

“It had jumped the road there and it was coming this way but because it’s all been grazed it didn’t get anywhere.”

Mackenzie District Mayor Graham Smith, who farms in South Canterbury outside the Mackenzie Basin, said his son’s Ben Dhu Station was under threat from the fire until a wind change.

Smith acknowledged that DoC had done a lot of good work and recently put a lot of money into managing wildings.

But believes grazing could help manage the risk.

“I’m not talking about decimating it to dust,” he told Rural News. “I am talking about managing it, light grazing throughout the year or certain times the year so that that foliage is managed.”

Smith also floated the idea of controlled burns to manage wildings, having seen how the Pukaki fire appeared to have knocked wildings back.

“In these areas only a small bit of fire went over it but all the wildings are dead. So maybe burning some of these areas from time to time needs to play a part in the management of wildings.”

Smith has had discussions with Sage and she agreed that the five aligned parties charged with joint management of the Mackenzie Basin, (ECan, LINZ, DoC, Waitaki District and Mackenzie District) would sit down and work out a fire management strategy.

“I do declare my interest as a farmer but I think really in the Mackenzie Country we have to take our hats off to those farmers and landholders up there because they in general have done a really good job in actually managing that ground,” Smith says.

“Conservation’s one thing and we all understand protecting the environment and we want to protect it in the Mackenzie because we’ve got some outstanding natural landscapes.”

Smith says you can’t shut vast areas of country up and then “just walk away”.