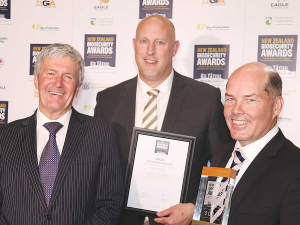 That’s the message from Penny Nelson, head of biosecurity at the Ministry for Primary Industries. She told Rural News, at the recent biosecurity awards at Parliament, that biosecurity underpins our primary sector exports – as well as many of the special taonga we have. She says we just can’t afford to have big incursions at the moment.

“I was interested to hear that in the KPMG’s agribusiness survey, biosecurity has been the top issue for the past 11 years. I think New Zealanders realise we have a special way of life and we want to keep it.”

Nelson says the awards, which have been held for the last four years, are designed to celebrate the great things that a range of people in communities and industry are doing for biosecurity. She says every year there has been an increase in the number of entries and as word gets out about the awards, more and more people are becoming involved.

Close to 200 people attended the awards ceremony held in Parliament’s banquet hall and hosted by the Minister of Agriculture Damien O’Connor.

Taupo-based dairy company Miraka took the top honours – winning both the industry award and the supreme award for its Te Ara Miraka programme, which boosted biosecurity awareness and culture change within its farmer supplier base.

The programme incentivises farmers, by way of an increase in their annual milk payout, to improve a whole range of practices on their farms. These include environmental, milk quality, food safety, animal welfare, health and safety and biosecurity.

The awards recognised the fact that Miraka had identified that biosecurity was missing from the programme and set about working with external parties to develop a special training course. Each farmer was trained in biosecurity risk assessment, risk mitigations and how to create and implement a biosecurity plan within their business.

The supreme award was presented to the Miraka team by O’Connor who praised the company and its staff for its initiative and strong commitment to biosecurity.