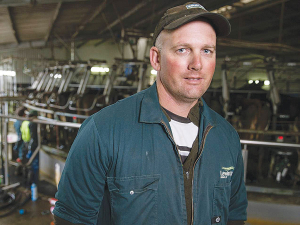 Farmers are urging banks to take a long term view of their businesses, now under growing pressure to improve their balance sheets.

Federated Farmers dairy chairman Chris Lewis says some farmers feel they are facing “a banking crisis” because of relentless pressure from banks.

While ultimately farmers must ‘own’ their individual financial positions, Lewis says banks need to go easy.

“They must take the long term view that dairying is a profitable business,” he told Rural News.

He says farmers have contacted him to complain about bank tactics. “There’s no doubt that farmers are under increasing pressure from the banks,” he said.

A Putaruru farmer, preferring to remain anonymous for fear of reprisal by his bank, contacted Rural News to complain about its high-handedness.

“I’ve never been spoken to like that in my life,” he said referring to a meeting he recently had with his ANZ bank manager.

He says rumours are rife that some banks are devaluing land by 25%, leading to higher debt to equity ratio for farmers.

His Putaruru farm, whose value was at least $5 million five years ago, would now fetch no more than $4m, giving the bank an opening to devalue his farm to $4m.

“With my debt around $3 million, the bank is forcing me out of farming, my livelihood,” he said.

ANZ general manager agri, Troy Sutherland, says the bank has been encouraging dairy customers to repay debt and improve their balance sheets to enable them to deal with challenges facing the sector.

“Currently, the agri sector is in good shape, but there are challenges ahead, such as increased regulatory demands, regional economic cycles and more stringent environmental practices,” he told Rural News.

“In our experience farmers are not afraid to lean into some of these challenges. But confidence is lacking in their uncertainty about what ‘good’ looks like and what their pathway is for getting there.”

Sutherland says the bank has seen some land values slip over the past few years, but he denies a 25% drop in value.

“Our own tracking of the market has seen a slight decrease of land values over the past two years, but sales evidence has been very low.”

However, Lewis believes the situation is dire for farmers in Southland where they don’t have the choice of selling land to other sectors like horticulture, as farmers have in Waikato.

“In Waikato land values are holding up because they are being converted into horticulture blocks, housing development and even chicken sheds. In Southland, where they can’t diversify, any drop in land value will hurt farmers.”

Milk price volatility, including swings in global dairy prices, is also adding to uncertainty in the dairy sector.

Ironically, it seems Westland Milk suppliers are among the best placed since the August 1 takeover by Chinese company Yili.

Lewis says one Westland farmer contacted him to say they were getting a $5.70/kgMS advance rate from Yili as per their sale agreement. Yili is matching Fonterra’s payout for 10 years and paying 85% of that as the advanced rate.

A new initiative has been launched to provide up to $6000 worth of independent advice to farmers struggling with farm debt.