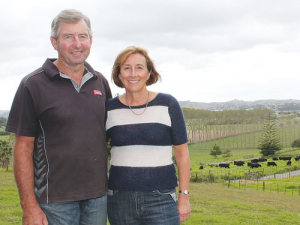 Ireland's Origin Green initiative will be a focus of Richard and Dianne Kidd’s trip as national winners of the 2016 Ballance Farm Environment Awards.

New Zealand’s food products are not promoted well enough inside our own country, Richard Kidd says.

The Helensville sheep and beef farmers left on Friday to look at agriculture in Europe. Ireland caught their attention because much has been said about Origin Green, which has 97% of farmers signed up.

Kidd spoke to Ian Proudfoot of KPMG, an advocate of the Irish scheme, and he says NZ is quite a few years behind.

“As we have researched it, we don’t think that is necessarily the case,” Kidd says. “But it could be a good model to consider and I believe the government has had its own people over there.”

They were also invited by a sponsor, Rabobank, to visit the Netherlands to look at farming systems. The bank pointed to a huge area of that country -- almost the size of Waikato -- that’s below sea level and highly productive.

The Kidds have good contacts to visit including farmers and companies, a couple of them in the UK.

When they entered the Ballance Farm Environment Awards a year ago they thought they should have a farm vision -- “a highly productive food producing business that leads by example in environmental sustainability and creates a rural landscape we enjoy and are proud of”.

Richard says Dianne is keen for them to be known not as farmers but as ‘food producers’.

“That is what we have to convey a bit more – that we are dealing with a product we all like to eat, a good quality product.

“We are a big sector facing many challenges: there is Brexit and we missed out on the TPP, but we are looking beyond that to promote out products. We don’t think our products are well enough promoted inside our own country.”