Back to school for farmers – to teach! 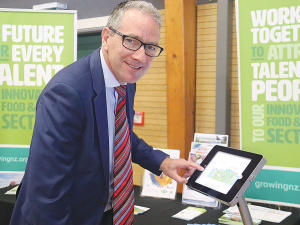 Farmers and others in the agri sector need to speak at schools if New Zealand is to get more young people choosing agri careers.

That’s the view of the Tertiary Education Commission (TEC) chief executive Tim Fowler, who spoke at the launch of the Food and Fibre Action plan – a pan agri approach to fill the labour shortage in the sector.

The action plan has had input from a group representing the various primary sector groups including dairy, sheep and beef, horticulture, the meat industry, Federated Farmers, MPI and various training organisations.

The report focuses on getting industry to identify the skills they see as needed, promoting career opportunities, having fit for purpose training courses from vocational level to PhDs and ensuring that employers provide a quality work environment.

The TEC is charged with delivering the training programmes and as part of this has created a food and fibre careers hub.

Flower says the food and fibre sector is mission-critical to NZ. He says that as part of the initiative, better careers information will be provided to schools to motivate and inspire young people and show them all the options available in the primary sector.

Flower believes there is a need to address this issue of providing kids at a young age with an idea of what actually happens on farms.

“In my view we need farmers in schools -- preferably in primary schools,” he told Rural News.

“It’s been demonstrated internationally, by a lot of research, that the stereotypes around biases of what kids can and can’t do are formed at the ages of seven and eight. So if we are trying to get kids into the food and fibre sector at the age of 15, 16 and 17, then clearly the horse has bolted.”

Fowler says it’s not just about getting farmers into the classroom. He adds there are plans to get software engineers, entrepreneurs, robotics experts to demonstrate all the various career options that support the food and fibre sector.

“What brought this home to me was when I was on a plane sitting next to a cow cockie who I was telling about this problem,” Flower said.

“He then described to me the variety of things that go on in his farming business. Not just the on farm stuff, but the business and technology skills that are required. We have got a job to do and there is no two ways about it, but it is fundamental that we get it right.”

Finally, Flower believes money is not really the issue in terms of funding courses. He says the issue is the lack of demand and hence the plan to attract more people into the sector.

Michelle Glogau is the chief executive of GrowingNZ, a group made up representatives from the various agri sector organisations and tasked with promoting career opportunities in the food and fibre area.

She was a member of the skills working group that helped produce this latest initiative.

Glogau says while some of the other sectors look much more exciting and sexier for young people, it’s a case of better messaging and dispelling myths – such as farming is all about early morning starts and living in sometimes isolated rural environments.

“That clearly isn’t the case and there are a whole host of other roles that can take place in the rural community or in the city and all contribute to our primary sector,” she told Rural News.

“We are really excited about ‘Inspiring the Futures’. And having the opportunity to shift those perceptions at primary school level and also in secondary schools where students are starting to make their subject and career choices.”

Glogau says while teachers play a role in determining a young person’s career, she adds that families are also influential.

“The challenge is to influence them as well.”

Follow the Government and go early with your on-farm decisions, says Sharon Morrell the head of DairyNZ’s consulting officers in upper North Island.

More New Zealanders are taking up the chance to work in horticulture amid the COVID-19 lockdown.