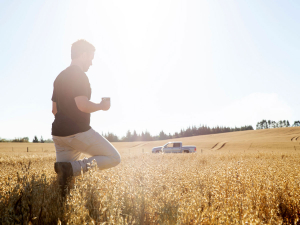 Managing Director Tim Ryan said Otis was developed to disrupt a dairy-first generation of Kiwis, to try a tasty plant-based alternative that is homegrown and sustainable.

“We started Otis with a clear vision to help New Zealand diversify its agriculture sector. A thriving oat milk market will help free the country from an over-reliance on dairying and the commodity price trap, moving instead to a high-value, more sustainable plant-based future”.

“Oat milk sells at a premium and is consumed increasingly widely offshore. The global non-dairy milk market is expected to reach revenues of over US$38 billion by 2024”.

There are many plant-based alternatives, soy, almond, coconut and rice milk all have their benefits but none are grown locally. However, New Zealand has a long-standing tradition of growing some of the world’s best oats. “This export market is largely untapped so there’s enormous opportunity for New Zealand to capitalise on that.”

According to Otis, oat milk contains about half the amount of fat than that of dairy milk, is high in the soluble fibre beta-glucan which aids in reducing cholesterol, particularly the type associated with increased risk of heart disease.

Ryan said the creation of Otis followed 18 months of market validation work to assess demand for oat milk and potential markets it could be exported to. Oats are sourced directly from Southland and Otago farms and processed at FoodSouth’s Canterbury facility.

Otis has a café network in Dunedin, Christchurch and Wellington ready to offer oat milk in their flat whites, or as Otis is branding them, a Flat Oat.

“We’re starting with prominent Common Ground Roastery who can offer Kiwis a premium oat milk experience. We spent nearly 12 months in product development to perfect the milk from a performance aspect involving countless hours testing with some of New Zealand’s best baristas.

“The end result is a product that tastes fantastic, is nutritious and sustainable. Oat milk is the fastest growing plant-based milk category globally, now Kiwis get to try the taste and nutritional advantages of oat milk.

“We have big plans to take this product to the world. But first we want to build on our foundation in New Zealand. We plan to boost production to half a million litres annually and expand to 300 cafes by the end of this year.

“We can’t wait for Kiwis to give oat milk a try.”