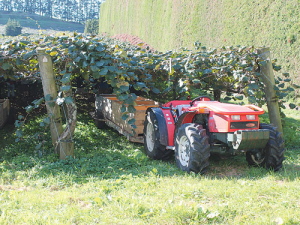 If the current ruling stands the government will be liable for many millions of dollars in compensation.

The Crown will appeal the High Court’s decision that the government was negligent in allowing kiwifruit vine-killing disease Psa into the country.

Last month, the court backed ‘The Kiwifruit Claim’, a group of 212 growers led by Strathboss Kiwifruit and Seeka, in the first stage of the trial, finding the Crown breached its duty of care to growers.

The Ministry for Primary Industries (MPI) says the appeal, lodged by the Crown Law Office, “seeks to clarify the scope for government regulators to be sued in negligence”.

“The ministry considers the High Court finding has the potential to significantly impact on the ministry’s biosecurity operations,” MPI says.

“MPI takes its biosecurity responsibilities seriously, and while the decision is being appealed, it must still be applied in the interim. The impact of this for importers and others will be delays in decision-making.”

MPI says no biosecurity system in the world can prevent every pest incursion.  A strong biosecurity system needs government, importers, industry and the public actively participating and acting to identify and manage risk, it says.

“As the matter will go before the Court of Appeal, we will be making no further comment,” MPI says.

Michael Franks, chief executive of Seeka, told Rural News for them this has always been about accountability.

“Clearly in the appeal from the Crown they haven’t got the point,” he says.

Seeka will also be lodging an appeal “on aspects that went against us in the original decision”.

“In the absence of a more sensible settlement discussion we have every intention of following it to its natural conclusion,” Franks says.

If appeals do not overturn the original High Court decisions, the level of compensation has yet to be determined but reported estimates have been $500 million - $800 million.

The appeal documents lodged by the Crown Law office say that the imports decision (on pollen from China which the court deemed was the likely pathway for Psa) was “an exercise in judgment based on a range of inputs and relevant considerations (not least the absence then of any scientific evidence that kiwifruit pollen collected from hand-picked closed buds in China was likely to be a pathway for Psa)”.

The Crown Law appeal documents also contend that the Plant Health and Environment Laboratory (PHEL) report relied upon for making import decisions was a significant review of the contemporary scientific literature prepared using expert peer-reviewed scientific judgment and contained “a clear conclusion that kiwifruit pollen was not associated with nor transmitted by any pests or diseases”.

The appeal also claims the plaintiffs failed to prove that a June 2009 consignment contained Psa. The High Court was wrong to conclude otherwise, the Crown Law appeal document says.