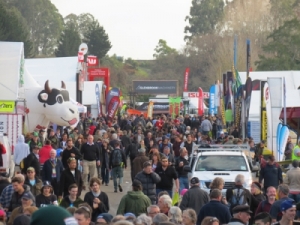 The event attracted over 130,000 visitors, including 500 international guests from 42 different countries.

Primary Industries Minister Nathan Guy has congratulated the National Fieldays Society for another successful event at Mystery Creek in Waikato.

The event attracted over 130,000 visitors, including 500 international guests from 42 different countries; expected to generate around $400 million into the New Zealand economy.

"These well-known New Zealanders will help raise awareness of the primary sector and encourage young people to consider a career in this broad field," says Guy.

Ministers Steven Joyce and Guy officially opened the Fieldays Careers and Education Hub which provided a learning platform for urban and rural teenagers interested in the primary sector.

"I was very impressed by the eighty entrepreneurs that entered the innovation section. A lot of these ideas will be commercialised and help grow our agri-tech exports, which are worth over $1.2 billion per year," says Guy.

"The Situation Outlook for Primary Industries (SOPI) 2016 was released at Fieldays and proves how diversified the sector has become. While dairy export returns are lower, overall revenue has grown by $1 billon to nearly $37 billion. Strong growth in horticulture, beef, wool, forestry, food processing and seafood exports shows the primary sector in good heart.

"The Government also announced an extra $600,000 of funding to help strengthen local mental health networks for farmers and rural communities. This will help ensure we maintain the momentum achieved last year, while also putting a plan in place for the future."