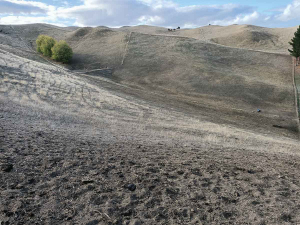 Hawkes Bay farmers are likely to encounter animal health and welfare issues soon as try to cope with the effects of what is believed to be the region’s worst ever drought.

Richard Hilson, managing director of Vet Services Hawkes Bay, told Rural News his worry is what will happen to the huge number of skinny animals in the region come winter. He says despite farmers’ best efforts to feed their stock, there are lots of light animals around and they will come under pressure when the winter sets in.

Hilson is also a farmer in his own right with 800 deer, 550 ewes and some cattle.

Hilson says the picture in the region is grim.

“The ewes were going backwards at the start of mating because no one had any tucker and so we would expect fewer twins and triplets and more empties. Wool quality will also be [affected] and they’ll have no capacity to handle potential stress,” he says.

“When winter comes you have large numbers of animals in lighter condition that aren’t carrying the fat that keeps them warm when it gets cold. They will also be more susceptible worms and lice.”

Hilson says his veterinary practice will be scanning about 15% fewer sheep this year because of the drought. He says hoggets account for about half of this number and notes while the number of actual flocks have remained the same, farmers have sold some of their capital stock.

“Some pretty drastic calls have been made. One stock agent told me he’s had 200 cows booked into the works every week for the past month,” he told Rural News.

“The number accounts for the loss of about seven breeding cow herds in Central Hawkes Bay, given that the average size of a breeding herd here is about 130 mixed aged cows.”

Hilson says he takes his hat off to the way that farmers in the region have handled the drought. He says some have had to sell animals for $50 each, whereas in a normal season these would fetch $150. He says many farmers are just haemorrhaging money to feed their stock and are taking a huge hit.

“They really care about their stock and are not worrying about themselves.  They are out there every day doing their best for their animals and at this moment they “don’t gave a rat’s arse” about Covid-19, he says.

Hilson says while the lockdown might have been bad for people in Wellington, the farmers in Hawkes Bay have taken a massive hit. He says many are gutted with the Government’s response to the drought.

“I wrote a letter to David Parker and Damien O’Connor and asking them to make sure that MPI shows a bit of compassion around the drought because there is no doubt there is going to be some welfare issues and maybe there will be some neglect,” he says.