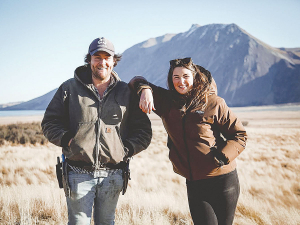 Will to Live Charitable Trust founder, Elle Perriam with Tekapo farmer Harry Railton who has sought professional help for his depression.

However, the founder of the charity behind it says accessibility is one of the main barriers for farmers seeking mental health assistance.

The initiative was launched in early September and Will to Live founder Elle Perriam told Rural News that they’d already had 15 farmers sign up.

Perriam, who founded Will to Live after her boyfriend passed away in 2017, says the issue in rural communities isn’t necessarily the waitlists for appointments but access to mental health services themselves.

“I don’t think it’s the waitlists. It’s probably more the accessibility for them to get physically to see someone,” she says.

Perriam adds that for many it is a long drive to physically visit a counsellor and media reports of long waitlists could be off-putting for some.

The RuralChange initiative, she says, also seeks to find a counsellor for those who are signed up to the programme.

“So, we’re not just handing out money and saying: ‘go find someone’. We’re also facilitating them, giving them a lift of local and accessible counsellors for them.”

Recently, an ACCfunded study for mental health programme Farmstrong found that 58% of recently injured farmers were able to link their accident to stress associated with farm work. Another 24% claimed aspects of diminished mental health were a major contributor to their injury.

Factors that contributed to this diminished mental health, according to the report, included having too much to do and not enough time, exhaustion, lack of sleep, challenges coping with the ups and downs of farming, and feeling in need of a break away from the farm.

Virginia Burton-Konia, ACC’s head of workplace safety, says she encourages all farmers to priorities their mental health and wellbeing.

“Farmers spend their lives growing our food and milk and helping our economy, but they’re not great at looking after themselves,” Burton- Konia says.

According to Shaun Robinson, chief executive of the Mental Health Foundation of New Zealand, the public system for acquiring mental health help has been left in a ‘dire state’.

“It’s beginning to head in the right direction,” he says. “It’s important to take charge of your wellbeing and seek out the mental health support that will exist in your community already.”

One major issue for farmers and those in rural communities is the isolation felt by some.

“Isolation is one factor that can impact on our mental wellbeing,” says Robinson.

Gerard Vaughn, project manager at Farmstrong, also says that isolation can be a big problem for farmers.

“People working in farming can spend a lot of time by themselves so it’s really important to get off farm and connect,” Vaughn says.

Vaughn says that – along with programmes like Farmstrong – the 1737 text line and rural support trusts are available for those who are struggling with their mental health, but these should not be used as replacements for counselling or clinical services.

Will to Live is working with Rural Support Trust facilitators across New Zealand to encourage the farmers they speak to, to use the funding. www.willtolivenz.com/ i-want-help

United Flower Growers (UFG) have teamed up with florists across New Zealand and the NZ Peony Society to campaign for mental health funds.