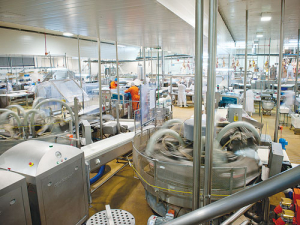 China is looking to NZ to help raise its animal production standards.

A Massey University professor of animal welfare has been advising China’s animal production officials on raising their industry’s welfare standards.

Professor Craig Johnson joined an international team in Guangzhou to help run a two-day workshop on the welfare of animals during trucking and at time of slaughter.

About 50 people influential in animal production in provincial China attended the event to improve their ability to give consistent information to people working in their provinces’ industries.

Many were veterinarians and production people responsible for large slaughter plants or transport systems. Some are in roles similar to MPI veterinarians in New Zealand meat plants.

“At the root of this is cultural differences [causing] animals to be treated differently in China from how they are in NZ,” he told Rural News. “But there is a very strong movement there to improve animal welfare as part of farm production systems,” he told Rural News.

“This is partly because the Chinese culture is catching up with the way of thinking about animals that we have in the west. It is also partly because China wants to be seen as a good international player and wants to be able to export freely to countries in the western world where animal welfare is important.”

Johnson says the Chinese officials were keen to hear the information buy he doesn’t think it would have surprised them.

A point of interest was how the Chinese can change cultural practices to better align with the information the visitors gave them.

The presentations were based on research literature on the effects on animals of transportation and of stunning prior to slaughter, and different methods of slaughter.

“We talked about welfare, and about meat quality and all the other issues that surround good welfare. What follows is how they can use the information we have given them in the management systems and what they have to do to improve the welfare of animals in these systems.”

Johnson says his goal was to talk about the science of animal welfare in a language the Chinese can translate in their day-to-day practice. He took care to avoid coming across as an advocate for improving their practice.

“It is for them to make the change. I try to be an unbiased outsider who understands the science and explains what the science is saying, which infers to them what they should be doing. But I don’t see it as my particular role to get involved in their management systems; that is their job.”

Giving his presentation -- in Microsoft PowerPoint -- was no simple task despite his experience, Johnson says. It was delivered via simultaneous translation and was quite different from giving a seminar in English -- relatively short sentences in simple language, containing the idea you want to put forward.

“Then you have to pause while the translator feeds that back to the people.

“Questions come back to you in Chinese. The translator translates the question and you get it in English and you answer it in English – so there is a time delay. It changes the way you think and the information you are presenting.”