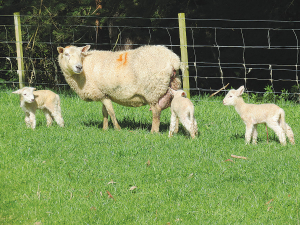 Massey veterinarian Kate Griffiths recently outlined the results of a six year trial looking at the ability of a ewe to survive as a productive animal until she is culled for age.

She told two Beef + Lamb New Zealand Farming for Profit field days in Canterbury that until now little information was gathered on farm ewe mortality. Previous estimates ranged from 2.8% to 15.7%.

The trial followed 13,142 ewe lambs from before their first breeding until they were culled for age as six-year-olds. The ewe lambs were all electronically tagged and run on commercial hill country farms in the North Island. They were mostly Romneys and some composites.

Over the length of the study, losses varied from 3.5% to 24.8% per annum and varied from year to year.

“These dead or missing ewes represent a huge area of loss,” Griffiths says.

Most years, mortality sat between 8% and 12%, with the highest mortality rates in the younger and older ewes.

Griffiths explained that during the trial a huge amount of data was collected about these sheep. They were all weighed and body condition scored (BCS) at pre-mating, scanning, set-stocking and weaning and, where possible, reproduction performance was also recorded along with the date and reason for culling.

This was one of the main limitations of the study.

Post mortems on thin ewes with BCS 2.0 and below showed most had died without any significant disease and may have responded to an intervention such as priority feeding.

The losses were tracked throughout the study with the first lot occurring when dry hoggets were culled (85% of ewe lambs were mated) and this was followed by hogget mortality which ranged between 4% and 10%.

“We are losing a lot of hoggets before they even get into the mature ewe flock.”

A subset of data looking specifically at mated and pregnant hoggets highlighted that success in rearing a lamb was influenced by body weight, BCS and weight changes during pregnancy.

In essence, it all came down to feeding.

As hogget weights at set stocking reduce, the risk of wet/dries increases dramatically and this relationship was the same across all flocks.

What did vary across flocks was the optimum weight.

However,  as a rule of thumb, the heavier the hogget is at set-stocking the more likely she is to rear a lamb through to weaning.

A number of hoggets in the trial lost weight between scanning and set-stocking and this massively increased their risk of being wet/dry.

“Weight is important so the hogget needs to continue to grow by 100-150g/day throughout the pregnancy,” Griffiths said.

“For every 1kg gained between scanning and set-stocking there is a 10% reduction in the likelihood of the hogget being wet/dry.”

She says ewe longevity is a significant factor affecting the economics of the breeding ewe flock.

To maintain ewe numbers, replacements are needed but these replacements have higher management costs and are a less flexible stock class.

High attrition rates mean fewer ewes are going to a terminal sire and means farmers cannot apply a high degree of selection pressure to their hoggets before they enter the mixed age flock.

There is also a biosecurity risk associated with buying in replacements.

The costs associated with on farm mortality are high as there is no cull value and if the ewe is pregnant the loss of lambs also needs to be taken into account.

As reproductive performance tends to increase with age, there is a potential production cost associated with a flock with a high proportion of younger ewes.

This study was funded by Beef + Lamb NZ, Massey University and The C.Alma Baker Trust.

Massey University is cashing in on the fact that most farmers need to have farm environment plans by 2025 as part of the Government’s new freshwater regulations.