'Pig' of a new welfare code 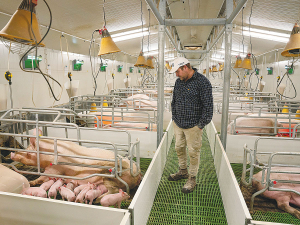 Pork NZ says no other country has completely banned the use of farrowing crates, which it claims is necessary during the highly vulnerable stage of newborn piglets' lives.

NZ's pig farming sector believes if a new draft welfare code for pigs is adopted it could spell the end of the country's pork industry.

Pig farming body NZ Pork says it could result in the deaths of up to an additional 60,000 piglets every year and will also require almost every indoor and outdoor pig farm in the country to be partly or totally re-built. It adds that the new regulations will force local consumers to rely on imported pork produced using standards illegal in New Zealand.

Kliess says the draft code goes well beyond the welfare requirements of other countries.

"It includes colossal changes to the minimum space allowance required for grower pigs, a ban or significant limitation on the traditional use of farrowing systems (farrowing crates), an effective ban on mating stalls and sets a minimum weaning age of 28 days for piglets."

"Furthermore, an independent economic analysis commissioned by the Government concludes the draft code is bad news for consumers," he adds. "It will lead to a predicted 18.2% increase in the price of all New Zealand-produced pork and a tsunami of imported pork undercutting local farmers and reducing sales of born and raised New Zealand pork."

Kliess describes farrowing crates as "the maternity ward for sows" and says these are specifically designed and proven to significantly reduce the main causes of piglet deaths - such as starvation, hypothermia and being accidentally crushed by the sow.

"Our calculations estimate that up to 60,000 additional piglets would die every year, depending on which of the two farrowing options is finally adopted," he adds.

"We believe that temporary confinement of the sow at a time when piglets are at their most vulnerable is a reasonable compromise when the alternative is the death of 1-2 piglets in every litter in a free farrowing situation."

Kliess says no other country has completely banned the use of farrowing crates and that is because these enabled a period of temporary confinement, which he claims is necessary during the highly vulnerable stage of newborn piglets' lives.

He adds that NZ Pork is particularly concerned at the unprecedented increase in the minimum space allowance for growing pigs proposed within the new code.

"We acknowledge that there is scientific evidence supporting an increase in the current minimum space requirements for growing pigs, however the proposed increases are unaffordable and unjustifiable."

Kliess says NAWAC's focus on space as the priority indicator of good welfare rather than overall welfare outcomes for all pigs and their physical, health and behavioural requirements does not make sense.

"In fact, both of the proposed minimum space requirement options in the draft code significantly exceed those required in the rest of the world - even countries that have subsidies, government funding and protecte markets."

Kliess says the NZ pig sector is committed to improving welfare outcomes across the board and accepts some areas in the current code need to change to keep up with good practice informed by the latest science.

"However, the proposed changes are prescriptive rather than outcome-based and will effectively mean almost every commercial farm, both indoors and outdoors, will have to be partially or fully rebuilt. Some farmers will choose to exit the industry."

NZ Pork says it's disappointed that NAWAC accepted extremely limited input from farmers and the industry's technical advisers - including its own animal welfare scientist - into the proposed changes.

Kliess says NAWAC itself has no experience at all of pig farming.

"We believe the draft code is clear evidence of this. An independent report by Australian animal welfare and animal science experts agrees and has highlighted significant flaws in NAWAC's methodology and conclusions," he explains.

"We're puzzled why NAWAC and the Government believe it is a good idea to impose welfare standards further removed from those in most of the world, while allowing pork to be imported and consumed here that is produced to standards that are currently illegal in New Zealand."

Kliess says other parts of the world are waking up to this contradictio and demanding that imported pork products are produced to equivalent standards.

"Is it the Government's intention to wipe out New Zealand's pig industry by imposing minimum standards that will be impossible for most farmers to meet?"

The Legacy Sale, dedicated to family and destined to give back, has done just that.