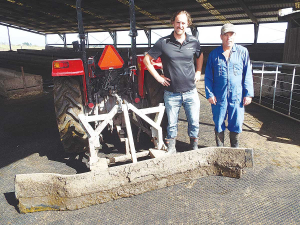 Rubber matting for cow comfort is well established in the northern hemisphere, where dairy herds can be housed for up to 180 days during the winter.

The benefits of mats are currently gaining traction in New Zealand, not so much for housing, but in stand-off areas, feed pads, collecting yards and entry and exit points to the milking shed.

Hex Mats, marketed by Taranaki-based ACR Agri, are a 24mm thick, natural rubber compound. They are supplied in 1.8m x 1.2m interlocking modules, featuring a hexagonal pattern on the upper surface with a studded lower surface. This is said to increase the cushioning effect, while also allowing drainage of any moisture.

The product is claimed to offer several benefits. These include a cushioning effect, grip that gives animals confidence, reduces lameness and provides insulation - compared to barren concrete.

Ponderosa Farms sits to the south-west of the city fringes of Hamilton, and is run by Henry and Nicky Hendricks, whose family emigrated to New Zealand from Holland in 1980. Running to 69ha in total, with 63ha effective, the property carries 320 dairy cows, with 60 in-calf heifers, 60 yearlings and seven working bulls on a nearby 25ha run-off block.

Working to a mantra of "cow time, not farmer time", the Hendricks are familiar with the concept of rubber matting, and already using a 230-place cubicle barn to house a large portion of their herd. However, they still wanted to improve the comfort of the remaining 100 animals that spent time in the feeding barn/stand-off area.

The 400 square metre area is used all-year round, as the farm is situated on the peat soils to the south-west of the city. The stand-off comes into its own in periods of wet weather and subsequent poor ground conditions, when animals can spend up to 20 hours each day in the barn.

Thinking ahead, the couple were also aware of likelihood of increasing animal welfare standards being imposed by MPI and wanted to get ahead of the game. So, they cut a deal with ACR to supply the product, which they installed themselves using farm labour.

"Once we got onto it, we laid the original 400 square metres of product, with just two people over three days," Henry Hendricks told Rural News. "Fitting the job in around our usual daily routine and, of course, the routine of the cows."

He says it quickly became apparent that the cows appreciated the comfort delivered by the product over the concrete.

Hendricks also noted that cows that were close to calving - which typically waited until they were turned out to a paddock, before getting on with the job - were happy to calve down on the rubber matting, with mothers and calves quickly up onto their feet.

Hendricks also notes that any cows that succumbed to post-calving milk fever, also appeared to appreciate the grip given by the rubber surface. They were able to get to their feet quickly, unlike previously on the concrete, "when some cows needed to be moved out to a nearby paddock to gain enough confidence and grip to get back onto their feet."

"Without a doubt, the installation, although a big investment, which should easily have a life span of 20 years, has been money well spent," he adds. "The product was easy to install, delivers tangible benefits to the comfort of the animals and is easy to keep clean with a tractor scraper, as we don't have an infinite supply of water for flushing."

In fact, the Hendricks are so impressed by the matting that they have installed more product in other high traffic areas of the yard and on the approach to the milking shed.