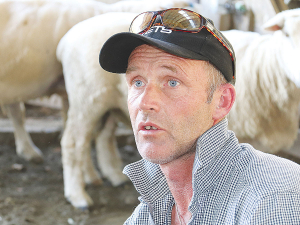 Vet Barney Askin, a speaker at a recent Beef + Lamb NZ field day at Massey University’s Tuapaka research farm, says farmers need to be decisive about what they are trying to achieve in their mating programme

Askin says when farmers are choosing their own rams they need to work closely with their ram breeder and select appropriate rams.

“Choose one or two indices to try to make a genetic gain rather than trying to improve on everything at once. It might be they want to improve fertility or lamb weaning weights, but it’s very hard to improve everything at the same time.”

Askin says farmers need to be clear about exactly what they want to achieve in their sheep mating programme. He says when it comes to choosing the individual rams a lot of personal preference goes into it.

“Different sheep farmers like different types and styles. The most important things are sound testicles and sound feet and they should always be buying from brucellosis accredited flocks,” he says.

At the field day, Askin had a number of rams in the sheep yards and he took time to demonstrate to the group the type of problems that can occur with rams’ testicles. It was a ‘touchy-feely’ session of a strictly rural nature. He pulled out rams with testicular defects and gave the farmers a chance to feel the problems for themselves.

“Of the rams I rejected with testicular problems, one had an abscess in the top of his testicles, another has testicular atrophy which means the testes had shrunk, and another had soft flabby testicles probably because he was too old,” he says.

While farmers may be able to do an initial check of the rams themselves, he believes the final check should be made by a person with the professional skills to make a decision on whether to reject or accept a ram.

Sound feet are also important when selecting rams. A ram with bad feet will not range far and wide to mate and will have difficulty mounting a ewe.

Askin said that when selecting a similar-sized or small ram for hogget mating “the theory is that when you are using animals of the same breed you are less likely to get hybrid vigour, which you get when you are cross breeding”.

“Cross breeding could result in outliers and lambs too large for hoggets to give birth to easily.”

Askin says many farmers pay close attention to choosing the right rams, but others seem to place less importance on it and essentially leave the decisions to the people they are buying rams from.