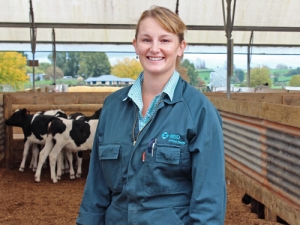 Jo Holter says colostrum is produced in the first 24 hours and is vital for helping protect calves from pathogens in their first days of life.

Get your colostrum feeding right and you'll go a long way towards raising healthy replacement calves.

That's the advice of Jo Holter, veterinary technical advisor with MSD Animal Health, who says poor understanding of colostrum and its management can expose newborn calves to pathogens that cause scours, such as rotavirus.

"If they survive, the impact on their gut health will last into their adult lives and they may never reach their true potential," she explains. "In many cases, the disease will kill them. That can be emotionally devastating and a big financial loss when you're raising replacements."

Milk from the first eight milkings is commonly referred to as 'colostrum', but this is incorrect, Holter says.

"Colostrum is produced in the first milking and this contains the highest levels of protective antibodies that calves need in their first hours of life to build immunity to bugs like rotavirus. The milk from the following milkings, until the cows join the milking herd, is called transition milk. This is still fed to growing calves, of course, but it doesn't have the same level of antibodies and it should be stored separately from the 'gold', first milking colostrum."

Suckling on the dam cannot always be relied on to deliver the volumes and quality of colostrum the calf needs and it may be necessary to supplement this by feeding extra colostrum in the first 24 hours of life.

According to Holter ideally every newborn calf should receive at least two 2L feeds of high-grade colostrum in its first 12-24 hours of life -- either via tube or teat, but tube is often less wasteful and ensures the calf gets the right quantity quickly.

"The ability of calves to absorb the antibodies in colostrum declines very quickly. At 24 hours after birth they will no longer be absorbed, so those first hours are crucial."

She advises the use of a Brix refractometer to give an objective measure of colostrum quality. It's a simple and inexpensive tool, and an easy way to ensure the colostrum being fed is good enough. A reading takes only a few seconds and it's easy to see whether a batch is above the 22% Brix threshold for grade 1 colostrum.

If cows have been vaccinated with a colostral vaccine such as Rotavec Corona, their colostrum will carry a higher level of antibodies to protect the calves fed it. Holter says good management is needed to ensure successful passive transfer of immunity to calves via colostrum.

"A good way of checking that your system is delivering good passive transfer of immunity is to blood test 10-12 calves aged one to and seven days. This will tell you whether calves have received enough colostrum and whether you need to improve your colostrum management or not.

"Factors such as poor body condition in cows, a short dry period, leaking milk before parturition, age, breed and timing of calf pickups all influence the quality of the colostrum that's produced. The quality of colostrum from a cow declines very quickly after birth, so the more regular the pickups during calving – preferably twice daily – the more likely you are to collect good colostrum."

Storage (for example, using a bacterial growth inhibitor) and hygiene are also important, as is good record keeping. Surplus colostrum can be safely frozen for use later in the season or even for the start of the following season.

While good colostrum management is at the heart of a successful calf rearing system, several other factors play an important part.

Holter says calves are exposed to big pathogen challenges from the moment of birth and this should be minimised. This starts with the cleanliness of the trailer used to pick up calves and follows through to the pens in which they are raised.

"Solid partitions between pens will help reduce the transfer of pathogens, and good bedding is essential; sawdust or woodchips are ideal, at least 15cm deep and over good drainage."

Stocking density needs care: as a rule of thumb, no less than 2m2 per calf should be allowed.

Holter says bullying within the pen can prevent the smaller calves and slower drinkers getting their share, so the setup should take account of this. Clean water and a good starter feed are also part of the management mix.

The calf pens should be an all in–all out system: once a calf enters a pen it should remain there until it moves outside.

"Calves should not be moving between pens as they get older, as this is great way to spread bugs around."

Pens should be well cleaned out after the last calf has left for the season, Holter adds. "Contaminated bedding needs to be removed and the flooring and walls should be clean and dry before a disinfectant is used."

Problems with calf scours typically set in after the first few weeks of calving, Holter explains.

"This is partly because of the gradual build-up of pathogens over time, and partly because systems for good feeding and hygiene can start to come under pressure as calving progresses and less time is available," she says.

"So give calves the best possible start with high-quality colostrum, preferably from vaccinated cows that will pass on good levels of immunity. After that it's up to the calf rearers to provide the feeding and environment to get those calves through their most vulnerable period."