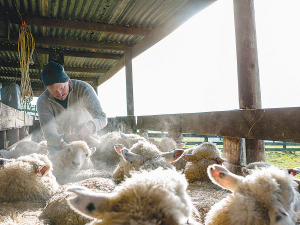 Farmers are being advised not to blanket drench ewes in the run up to lambing season.

“Healthy, well-fed, robust ewes should not need drenching, but there are circumstances when drenching ewes may bring production or animal health and welfare benefits.”

She says grass availability has the greatest influence on responses to pre-lamb treatments but ewe condition was also important as there was likely to be a higher cost-benefit from treating light ewes for worms.

“Where there is flock-wide response to long-acting products (capsules and long-acting injections),  there is likely to be problems at a farm system level, and the potential returns from addressing these are far greater than any returns from a long-acting drench,” says Dodunski.

In situations where ewes lamb in optimal body condition (BCS 3-3.5) and where pasture growth rate, length and quality of the forage doesn’t limit their daily intake (bare minimum 1200kgDM/ha or 3.5cm grass height), there is little or no productive benefit in providing long-acting worm protection.

A project run in the Wairarapa in 2011 and 2012 which set out to measure production and financial responses to long-acting pre-lamb treatments on commercial farms highlighted the pitfalls associated with these products.

Led by AgResearch and Baker & Associates, there were 14 separate on-farm trials conducted over the two years. This was followed up by five similar studies on commercial farms in other parts of the country.

Dodunski says these studies have provided broadly similar outcomes. The farmers where there was no (or very low) response to the long-acting treatments were those with a long-term history of a high-performing, stable ewe flock with good feed levels and high level of management skill.

While ewes treated with long-acting products were heavier at weaning, as were their lambs, the total weight of lambs weaned per ewe did not improve.

In nine of the 14 Wairarapa trials, the treated ewes reared fewer lambs than the untreated ones.

Dodunski says some of the Wairarapa farms, 25-30% of the capsule response was attributable to the minerals in the product (selenium and B12).

The over-riding issue with long-acting products is drench resistance, and in the trials, concurrent ‘mectin and white drench resistance was evident on a number of the farms, with as many as 50% of the treated ewes having positive egg counts throughout the capsule pay-outperiod.

Dodunski says in a  two-year monitoring project of long-acting treated ewes in 2016 and 2017, Vet Services Hawkes Bay found that 80% of farms surveyed had egg-laying worms in their treated sheep.

For farms that elect to treat ewes with long-acting products, Dodunski ecommends implementing refugia by running untreated and treated ewes together. This provides the offspring of ‘unselected’ worms with the opportunity to breed with any resistant offspring being shed by the treated ewes.

“But the over-riding message is that we should be looking to make a pre-lamb drench irrelevant by getting the management aspects right”.