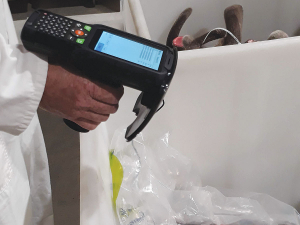 Prototype chipped and barcoded tags (that were applied on farm) being tested for chip readability after velvet processing. Photo credit: Holly Walter of Waikiwi Vets, Southland.

A new system is being developed for tracing tagged velvet as it moves through the supply chain.

If the concept is supported, each individual stick of velvet will be identifiable through a central database to the farm of origin from the 2020-21 season.

DINZ (Deer Industry NZ) science and policy manager Catharine Sayer explains there are supply chain confidences that the new system would maintain in its default operating mode. Customers definitely would not be able directly to trace farm origin on any stick of velvet at any time.

“However the system could be used to disclose farm of origin information to customers if it was of commercial value and all participants in the relevant chain were agreeable,” Sayers told Rural News.

The new type of tag could support the premium market positioning of NZ velvet by allowing branding to be added and reducing the risk of counterfeiting.

Sayers says with health foods, customers are increasingly focussed on the safety of the products they consume.

“By linking animal welfare compliance and food safety compliance into one joint system the supplier of velvet bearing the new traceable tags can prove the integrity of the velvet to the companies marketing such products.

“New Zealand will be demonstrating leadership amongst velvet-producing nations in this regard and therefore maintain a pillar of its current price premium.”

Sayers says the type of tag is needed to replace the existing nylon cable ties that tend to become brittle and break during freezing. There is also the opportunity to add value by:

• Helping farmers, vets and other businesses in the velvet supply chain with their inventory management, which will become virtually paperless.

Sayers says feedback (initial submissions which were due by May 6) has come from participants of prototype trials (farmers, exporters and processors), one-on-one conversations with farmers, veterinarians, velvet buyers, velvet exporters, MPI, velvet processors and formal meetings with the National Velveting Standards Body and a forum of velvet buyers, processors and exporters.

Sayers says farmer feedback was mainly about the practicalities of a new style tag (how easy it would be to apply and whether it would stay put).

“Parties involved in trading velvet were extremely supportive of the concept based on their customers’ expectations but keen to ensure the system worked well from a practical perspective, e.g. that chip readability would be reliable, that data capture and upload would be straightforward and that farmer compliance with their obligations would not hold up product movement.

“Since the start of industry-wide consultation many of the queries have been into the ongoing cost of the new system.

“While the new system is likely to be more expensive than the current system, it is forecast to provide net benefits to the velvet industry overall.  DINZ is yet to determine how the increased costs would be allocated and would welcome industry’s views.”

Sayer says several prototype tags have been piloted by members of the Southland NZDFA as well as the three largest velvet exporters.

The best format appears to be an artificial paper ‘wrist band’. In the next (2019-20) season a barcoded version will be brought in to replace the cable tie, but existing tag distribution, recording, paperwork and VSD requirements will not change.

“If this works well, we will look to roll out a fully electronic system with electronic chips in similar-style tags for the 2020-21 season. Only then would record keeping requirements and methods change.”

Farmers would no longer be required to keep paper records of tags received, applied or transferred. Nor would they have to produce paper VSDs. The selection and design of the 2019-20 tag is now being finalised based on learnings from the trials with prototypes.

A brighter outlook for venison?

Improved market conditions for venison are expected for the 2021 season, according to industry body Deer Industry NZ (DINZ).

Innes Moffat says he is optimistic for exports of venison in 2021.

Challenges facing the rural sector reinforce the need to work together and ensure linkages are strong and smart, according to Dr Amanda Bell.