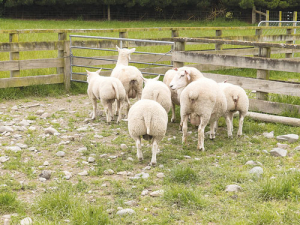 Purebred Beltex lambs (with their Perendale surrogate mothers) show off their heavy rear ends in the yards at Blair Gallagher’s Mount Somers farm. The ram lambs’ tails have been left undocked, standard English practice for the breed. Inset: Mount Somers farmer Blair Gallagher has formed a partnership to bring Beltex sheep to NZ.

The Beltex, or Belgian Texel, has been farmed for about 18 years in the UK, where it is prized for its notably heavy hind-quarters and high meat yield.

Gallagher says they first looked at bringing the breed here about ten years ago but quarantine and other requirements made it prohibitively expensive. Changed protocols now make it practical, but still expensive.

Imported Beltex embryos and semen have been introduced into the Perendale, Suffolk and Poll Dorset flocks on Gallagher’s Rangiatea farm, near Mount Somers in Mid-Canterbury.

The first lambs were born in early August and Gallagher now has 55 from five different sires. He admits they did not have a “brilliant” take on embryo implantation, achieving only 37% when hoping for 50%.

So they went back to the UK to get more semen and embryos from another three studs – two unrelated sires each – to further spread the genetic base.

“Hopefully we won’t have to go back again because it’s a pretty good way of emptying your bank account,” Gallagher jokes.

He believes that as a meat breed the real potential lies in using Beltex terminal sires through NZ flocks to lift the quality of carcase conformation and meat yield.

“The half-crosses won’t be as good as the pure-bred, but the poll Dorset or the Suffolk cross will be closer to 52%. So there’s a huge lift in yield and that’s the real potential of the Beltex.”

He took 16 animals to the Canterbury Show last week, including four pure-bred Beltex lambs born to surrogate mothers from embryo implants, some AI crossbred lambs and their mothers.

Although the animals were not entered in competition classes, Gallagher expected the display at the show to attract a lot of interest.

The Beltex is believed to be the first new sheep breed brought to New Zealand since the Charollais about a decade ago.

“It’s a million-dollar project over two years, but I can see real benefits for the greater NZ sheep industry. There’s a huge amount of interest in what we’re doing.”