Musical chairs at SFF board 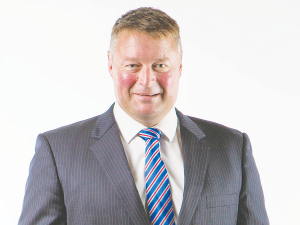 Former chair Rob Hewett has replaced his successor Richard Young at the head of SFF co-op's board table.

It is out with the young and in with the old at the board of meat company Silver Fern Farms Co-operative (SFF).

In a move that looks akin to musical chairs, former chair Rob Hewett has replaces his successor Richard Young at the head of the co-op's board table. Young stood down from the role at the conclusion of SFF's annual meeting earlier this month. However, he will see out his remaining two-year period as a farmer director.

SFF's board has now appointed Young's predecessor Hewett to step back into the chairman's role - the job he relinquished two years ago Hewett will also continue in the role as co-chair of parent company Silver Fern Farms Limited.

Young was elected as a SFF farmer director in late 2013.

The West Otago farmer was the former chair of meat sector ginger group of Meat Industry Excellence (MIE). He was then appointed chairman of Silver Fern Farms Co-operative - which jointly owns a 50% stake in Silver Fern Farms Ltd with Chinese-based Shanghai Maling Aquarius - in 2019.

Ironically, MIE strongly lobbied against SFF selling the 50% stake to Shanghai Maling, with Young - along with fellow MIE-aligned directors Dan Jex-Blake and Fiona Hancox - labelled sell outs by the ginger group in the wake of the deal being done. Hancox retired as a director at the recent annual meeting, while Jex-Blake still remains on the board.

Speaking after the meeting, Young said he was standing down as chair to "...facilitate transition to the next generation of Silver Fern Farms Co-operative leaders..." He added that is was a good time to "bow out" and let the next person take it on for a longer period.

However, the co-operative board has now reappointed Hewett as chairman after he was elected as a farmer director. Gabrielle Thompson, who was previously a board-appointed director, was the other farmer director elected.

"Over the next three years there will be significant managed transformation in our board composition as several of our farmer elected directors come to the end of their maximum terms as allowed for in our constitution - myself included," Hewett says.

"While the constitution does allow for term extensions for directors who have reached their maximum term, it is the clear intention of the co-operative board to manage succession proactively."

Hewett claims SFF's board is very focuse don the importance of developing the next generation of governors.

"I am particularly pleased at our recent election with the high calibre and good number of candidates that put themselves forward for public scrutiny."

He added that the election of Thompson as a farmer director will free up a board-appointed director role, which the board will be looking to fill later this year.