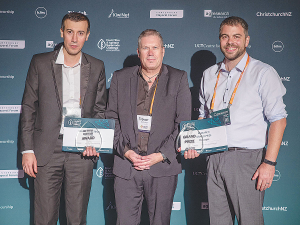 New Zealand meat producers will have to change their breeding priorities to take a full advantage of a new optical meat quality monitoring system being developed by AgResearch.

The Clarospec system is designed to analyse meat cuts in real time as they go through a meat processing plant, using hyperspectral imaging to provide objective measures of meat quality.

AgResearch says the technology can provide information on key aspects such as structure and composition that influence flavour and texture.

"This technology will support a shift from volume to value and allow lamb producers to tailor production to meet the needs of global consumers," project leader, Dr Cameron Craigie told Rural News.

He explains that there are well-documented correlations, consistent in New Zealand and worldwide, between consumer preferences and traits such as tenderness, pH and intramuscular fat content. All of which can be measured in the lab.

The machine can "see" the molecules associated with those traits, whether the product is beef, lamb or venison.

Craigie says it is well-known that 70% of New Zealand lamb is suboptimal in terms of consumer outcomes, but the optimal 30% is "undifferentiated and undiscoverable" by consumers.

"So, we're missing an opportunity there because we're not capitalising on the 30% and we're not doing much about improving the quality of the 70%," he adds.

"We want to produce the best lamb in the world - that's what we're known for - but we've started to create a problem. We've been driving for efficiency gains and sheep production but the traits that underpin some of the eating quality attributes are well-known to be negatively correlated with some of the lean meat yield or growth traits."

Craigie says this means we got bigger sheep, faster and inadvertently reducded product quality over time.

The Clarospec system's been in development for more than four years and arose from an earlier strategic decision by AgResearch to build capability in the remote sensing area.

It consists of what Craigie calls a "military-grade" camera coupled with their own software and prototype hardware. A commercial installation would be built into a meat processing plant with its own bespoke hardware.

"We've got some demand and we hope to have a couple running by Christmas and start getting that data flowing and understanding what some of those impacts of on-farm decisions are on product quality on product quality in the real world context," he told Rural News. "This will help producers understand how they can do better."

However, Craigie cannot yet say who the commercial partners may be.

He believes the real value will be around the data captured and how that can be leveraged along the supply chain, both to inform on-farm decisions and reward producers for optimal results. He adds that it will also enable downstream sorting of product into different categories, qualities and marketable attributes.

Craigie says he has kept in the back of his mind the classic example of what not to do, which came from Europenan pork producers in the 1990s when: "everyone was anti-fat" and they responded by breeding pigs to be really lean.

"It was all about lean meat yield and they actually destroyed their eating qualities.

"They're still recovering to a certain extent," he says.

The Clarospec system was a major prize winner at the recent Food, Fibre and Agritech Supernode Challenge, announced in Christchurch on May 11.

KarbenFibre, an environmentally friendly battery technology, which optimises and reduces the cost of flow batteries using natural fibres, was named overall winner in the Value-Added Product category ($13,000) and runner-up in the Research category ($15,000).

The grand prize in Enterprise ($30,0000) was won by Genesmith with their technology using facial recognition on livestock.

The Food, Fibre and Agritech Challenge was run by ChristchurchNZ, with the support of several regional and national partners.

OPINION: AgResearch scientists are pushing boundaries to see how much quality sleep cows are getting.

An AgResearch study shows that dairy sheep appear to have lower nitrogen leaching per hectare than their bovine counterparts. Dr Diana Selbie has been leading the MBIE-funded project looking at the environmental footprint of dairy sheep. Its aim is to provide some hard data to back up claims that this industry is more environmentally friendly. Peter Burke reports...