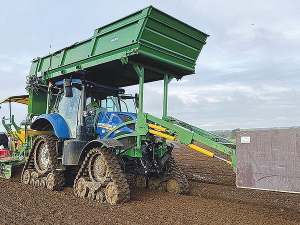 The bulb planter machine is operated by a two-person team, with the driver keeping an eye on various camera feeds to oversee machine guidance, speed and the loading system.

And in the case of horticultural operators, bespoke machines are often needed to deal with individual circumstances.

Taking this philosophy to the limit is Belmont Nurseries, the UK’s largest commercial outdoor tulip grower. Based in East Anglia, the company grows around 55ha of tulips, alongside 165ha of daffodils, peonies, gladioli and Sweet Williams, in a near year-round operation.

The extensive workload is made possible by a highly-modified New Holland T7 210 Auto Command tractor fitted with a 320mm wide Soucy track system. The tractor can operate in a wide range of soil conditions with a light footprint spread over about 5.12 square metres – around five times greater than the standard wheel-based set up.

A further advantage of the track system, delivered by its longer footprint, is the ability to absorb the effects of any uneven ground or undulations. This results in a more consistent linkage height, with more precise depth control of the planter unit.

The biggest change from the norm is an up-front loader system that operates in conjunction with an over-cab holding bin. This equipment was supplied by Dutch company Koops, with the conversion to the tractors carried out at its base in the Netherlands.

The machine is operated by a two-person team, with the driver keeping an eye on various camera feeds to oversee machine guidance, speed and the loading system. The front loader allows 600kg boxes of bulbs to be lifted to the overhead hopper, with a capacity of three to four boxes, depending on bulb size.

The base of the main hopper has a full-width PVC conveyor belt that, when activated by the planter operater, feeds a second hopper above the planting system. Bulbs drop from this hopper at a rate based on travel speed and the required bulb count, typically between 100 and 400 bulbs per running metre for tulips.

From the secondary hopper, bulbs are dropped onto a shaker plate that spreads them across the full width of the planter. At the end of the shaker plate, the crop is fed between two beds of netting, held taut by a series of rollers. This makes the bulbs easier to lift cleanly from the beds at harvest time, with a minimum amount of soil.

Achieving outputs of around 3 ha/day, the planter uses two snowplough-like blades to part the soil, pushing material up against a large sideguard to form the 1.54m planting bed. Working depth is controlled by radar sensors on the tractor’s rear linkage that in turn uses hydraulic cylinders in place of the original drop arms.

After planting, the bulbs are covered using discs and an integrated hood, with a small degree of consolidation.

Positional accuracy is maintained by a Topcon X35 console, working in conjunction with the farm’s own base station, removing the need to purchase an ongoing RTK correction signal. Alongside position, the system also uses ISOBUS to deliver automatic section control in non-cropping areas such as footpaths, tracks and headlands, alongside planting rates and bulb counts. Working to an accuracy of around 5mm, the setup also allows operators to position where one variety ends and another starts, a key consideration when up to 35 different varieties are being grown.

With many self-propelled forage harvester manufacturers offering machines hitting 1000hp, the bottleneck in any harvesting system is always likely to be at the clamp.