All in together for bobby calves — Editorial 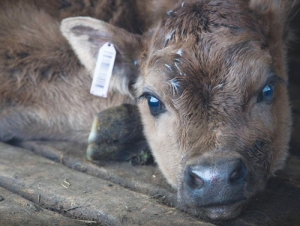 MPI and many heavyweight industry groups joined forces to educate their members and the public on what they are doing to protect these creatures.

It is great to see all those involved with bobby calves working cooperatively and positively to forestall a repeat of the terrible incident that aired on television showing mistreatment of these helpless animals.

MPI and many heavyweight industry groups joined forces to educate their members and the public on what they are doing to protect these creatures.

The workshops run by DairyNZ with the NZ Veterinary Association were excellent and no farmer can any longer offer the excuse 'we didn't know' what was expected. Also, MPI has done an equally good job of getting the message out to all stakeholders.

The setting up of the bobby calf action group was a sign of true leadership in the primary sector and the public needs to recognise that farmers and others in the sector care as much about the welfare of animals as the so-called animal rights groups.

Still it must be said that the animal rights people did a good job in 'outing' those who treated bobby calves cruelly. Animal rights group will by and large cease to exist when there is nothing for them to complain about. But maybe that is asking too much.

One has to admire the transparency of MPI which is saying to the public 'tell us if you see something you think is wrong'. This shows MPI is committed to getting the public to understand it will take seriously any mistreatment of animals and that it will crack down on people who break the law.

As MPI's Scott Gallacher points out, there is also an opportunity for the rural sector to educate the wider public on normal good farm management practices which can sometimes appear as cruel when it is not. An obvious example is the docking of sheep.

This whole saga has shown that farmers and everyone in the supply chain have no place to hide. Most Kiwis have a cellphone with a camera and within minutes any hint of malpractice can be widely circulated on social media.

The new rules taking effect on August 1 are the first of many coming in during the next year. It would be great if farmers and others saw fit to implement these changes ahead of time and show the public they don't just follow rules but lead the charge -- farming in ways that anticipate the expectations of consumers and the public.

‘The General’ stamps her authority

A 13-year-old Holstein Friesian dairy cow from Otago has been named the 2020 Valden Cow of the Year.

You've worked hard to get your cows in great condition for calving. Next, it’s time to make sure they stay on track for mating.