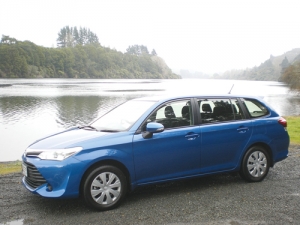 We've all got one, whether it’s the old t-shirt from the seventies, the old shoes even after the puppy chewed them, or that favourite spade with the handle taped up.

The only problem is ensuring that the ‘domestic superintendent’ doesn’t go on an unannounced spring clean and throw them out.

So sits the Corolla Wagon, an old favourite that’s been about forever, blends into the crowd in an understated way, and is as reliable as that old pair of shoes. Look closely because there are lots on the roads, and the registration plates would suggest that you can’t kill them. So what about the current offering?

First impressions are there haven’t been a lot of changes over the old model, but the introduction of a few curves to the body shell and some chrome and black on the front grille have tidied things up, and colour coded door handles give a sense of cohesion to the design.

Jumping into the cabin leads to a first impression that the seat is a little soft, but as you drive it seems to give good support and is genuinely comfortable. And then there’s that familiar feel, where everything falls readily to hand, as if you’ve been here before; a tribute to great ergonomics.

The Wagon gets the 1.5L DOHC engine with variable valve timing and punches out 80kw without any fuss, though appears slightly harsh at takeoff. The test car was fitted with the optimised CVT transmission that strives to match engine speed to forward speed and it seems to do it quite well; while the first impression is that you’re not going very fast, the speedo suggests otherwise. It’s all so easy and whether you’re in town or on the open road the kilometres pass by.

The transmission also has optional manual mode which offers seven speeds, but why would you? Drive mode is so easy. The car is also easy on the pocket -- 4.4L/100km, in line with the same company’s small hybrids, 14% better than the previous version

The rest of the package surprises too, with a specification called GX but offering much more: vehicle stability control, traction control and hill start assist.

There’s also keyless engine start, a start-stop feature for the engine in a bid to save fuel when stationary, and electric power steering that’s well weighted and offers the right degree of feedback.

Other controls are straightforward, including good old round knobs for heater, radio and other key functions, Bluetooth, USB connection and a standard audio jack.

The rest of the interior is as you would expect: plenty of legroom for the rear passengers, rear seats that split 60:40 for long narrow objects, and a rear load area holding 407L in standard set-up or a cavernous 972L with the seats folded.

In summary, the Corolla does what it says on the can so you probably couldn’t find better in the mid-size wagon sector.  It gets along quickly without effort, won’t break the bank at the fuel pumps and has heaps of room in the back: great for the school run, or collecting a few bags of calf pellets. Just don’t let her indoors catch you!