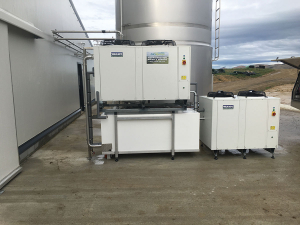 The milk cooling system at Luxmore Farm, Southland, was completed by Cowley Electrical Dairy and Pumps recently. It has two Tank chiller units - one connected to the base of the tank and the other to the side wall.

Cowley says the milk cooling system is specifically designed for Luxmore Farm and is a model for others to follow.

He says the company can design milk cooling systems tailored specifically for a farm.

“At Luxmore we installed two Tank chiller units, one on each of the two milk silos at the farm.”

The cooling units are capable of heat recovery, removing heat so they work more efficiently. Hot water can then be put back into the hot water cylinder at 55-60 deg C.

“The smaller silo is designed to be used at the start of the season for cooling calf milk,” Cowley said. “More customers are looking to cool their calf milk so it lasts longer.”

He says the calf milk can be cooled at a temperature determined by the farmer. When calving is finished, the silo can be washed out and reconfigured to store supply milk.

“The main advantage is the ability to use that silo for two different purposes, and two different times of the year, fully utilising the equipment on farm.”

The Luxmore cooling system was installed before the start of the 2019-2020 milking season.

Cowley had one refrigeration engineer and a stainless fitter work on the project.

He says efficiency and longevity are two key factors farmers in any new milk cooling system.

“It’s always important to look at what could change in the future. Don’t just go for a system which is the bare minimum.

“You need some redundancy in there so you’ve got capacity for any changes to regulations or increases in production volumes.”

Cowley says having the right information during the planning stages of a project is important to ensure an efficient system.

“That comes back to Craig and I providing the right info to the farmer, so we can deliver the correct specifications and options.”

Installing a data logger on a farm’s existing milk cooling system provides a picture of how well it is working, Cowley says.

“We can put another probe on the water going into the plate cooler, to measure the water temperature. And we can put a probe on the silo to show us how quickly the unit is cooling the silo.

“From those three readings we can determine what needs to be done to improve.”

Cowley says farmers are aware of the need to comply with milk cooling regulations, “but there is a lot of information out there and some of it not in the best interest of farmers”.

“DairyNZ, Fonterra, your own dairy co-op - they are best placed to give you the right information to understand what the regulations are and the implications for your farm.”

A new Freezflow Icebanks system from Total Refrigeration, which snap chills milk to the required temperature, has brought a Dargaville dairy farmer some peace of mind, he says.

Milk cooling is consistently a focus of regulators and customers, says Fonterra.

Milk cooling affects milk quality. The faster the milk is cooled after milking, the better its quality when it is collected from the farm.

Snap chillers hoping to be a drawcard

The only snap chilling system that can simultaneously perform a range of functions is set to be a drawcard at Fieldays.