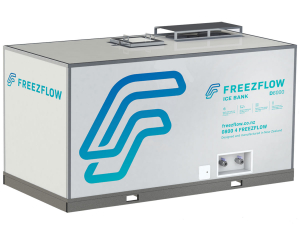 An ice bank snap chills milk to the required temperature.

A new Freezflow Icebanks system from Total Refrigeration, which snap chills milk to the required temperature, has brought a Dargaville dairy farmer some peace of mind, he says.

Darryn Kaye has been farming on his 220ha property for 30 years. He spring calves a 420 Friesian Cross herd running a system 2.

His previous cooling system was small and inefficient compared to his new system, he says.

“We knew a new system was coming and we wanted something more efficient. Richard O’Flaherty’s (Total Refrigeration owner) brother Paul looks after our refrigeration in Dargaville and he said they had a prototype they wanted to try out and wanted to know if we were interested so we went from there.”

After some rewiring and changes in the shed the Freezflow system started in August 2018.

“It has basically six tonnes of ice in the back of it. The system has a double plate cooler which means half the milk is cooled by bore water and the ice takes over the other half and cools it down to about 5°C degrees before it goes in the vat.

“It is saving a bit
on power because the other system was either making ice or chilling milk. This one only makes ice when we are not milking so there is always ice there.

“We have found it very good.”

With the new monitoring system Fonterra is bringing in on the vats, “with our milk going in at 5°C - 6°C degrees we will have no problem in the future,” Kaye says.

The system has brought some “peace of mind”.

“The milk is coming at 26-28°C degrees out of a cow and within seconds it is down to 5°C degrees so basically it is snap chilling it.”

And he says the guys from Total Refrigeration have been “excellent to deal with – very good”.

Milk cooling is consistently a focus of regulators and customers, says Fonterra.

Milk cooling affects milk quality. The faster the milk is cooled after milking, the better its quality when it is collected from the farm.

Snap chillers hoping to be a drawcard

The only snap chilling system that can simultaneously perform a range of functions is set to be a drawcard at Fieldays.