Cost of getting soil fertility wrong 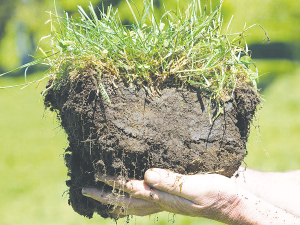 Clover is an example of a particularly phosphate-hungry plant, but especially important because it can fix nitrogen from the air, reducing the need for N fertilisers such as urea.

Although many people on the planet are willing to pay more for New Zealand produce, productive land to grow that food and fibre is becoming unavailable here in our own backyard.

Both the current government and previous governments aimed to double export dollars from the primary sector.

In answer, ingenious farmers and growers have had to become more efficient with their inputs to do more with less land. The Ministry for the Environment's (MfE) report entitled Our Land shows export values of the primary sector doubled while available highly productive land halved between 2002 and 2019.

This was an impressive achievement, but not without impacts. Hitting the political ambition whilst reducing land use and environmental issues is going to require farmers to become even more efficient in the use of nutrients like in nitrogen and phosphorus.

Phosphorus is essential for all plants and is the second most abundant mineral in the body. A key indicator of soil fertility is how much phosphate is available to the plant - most commonly measured by the Olsen-P test.

A sample is sent to an independently accredited laboratory so farmers and growers can track their soil's supply of plant-available phosphate.

In any given paddock or farm, this information will never be static as phosphate is extracted from the soil by each plant. Clover is an example of a particularly phosphate-hungry plant, but especially important because it can fix nitrogen from the air, reducing the need for N fertilisers such as urea.

The Fertiliser Association has collated many of these farmers' and growers' results. Based on this extensive data, the national median Olsen-P value for dairy farms across all soil types is below 35, well within the target range. This is based on more than 270,000 records over five years. While there will be differences in methodology, this is a lot less than the figure for dairy farms mentioned in the MfE report.

Reaching the top of the target band for Olsen-P does not mean stopping the use of P fertiliser altogether. Annual P inputs are required to maintain the target band Olsen-P by replacing the nutrient removed by the food produced and shipped off farm.

Between 2002 and 2019, phosphate fertiliser use declined by nearly a third, which shows how efficient farmers can be. Compared to mineral sources of phosphate, organic sources such as manures or bone meals present ethical, cultural and supply issues as well as challenges of odour, P content variability and spreading imprecision.

Overstating Olsen-P levels for farms is an issue of opportunity and cost both financially and environmentally. As the saying goes, "it's easier to be green when you're in the black." So accuracy matters here - not just for policy purposes, but for planning what can end up being one of farming's largest investments.

A national median conceals variation across regions, soil types, farms and even across different paddocks. The key is identifying this local variability through more precise testing and applying the right amount of the right nutrient at the right time and place. The co-operative nature of the sector helps here as there is little interest in selling the business owners more than they need.

The prize of nutrient use efficiency is worth fighting for, but the battle is a local one and frequently relies on emerging technology. There have been technical breakthroughs in the past five years such as aerial scanning of hill country farms that reduces the need for physical sampling. Computer- controlled aerial spreading also shows promise as a way of putting the P where it’s needed instead of where it is not.

The stakes are high from an environmental and economic standpoint. The ability of some farms to experiment with different tactics such as regenerative agricultural practices has often been hard-earned by a solid investment across decades in building an optimum Olsen-P level.

Every bit of food grown for home or overseas depends on the top 25cm of Aotearoa’s productive soil, so efforts to quantify and assess this precious resource are welcomed.

Many of society’s land use choices such as urban sprawl, population growth and dairy conversion rates are well beyond the co-operative’s mandate. However, when it comes to essential nutrients and fertilisers, we have the expertise and technology that can help with their more efficient use.

“Nutrient efficiency” may not be the catchiest of buzzwords, but it’s what New Zealand needs if it stands a fighting chance of meeting its financial and environmental ambitions.

Good soils are at the heart of farming in Waikato.

Soils the foundation of food production

Healthy soils are the foundation of global food production and ought to become a key agenda item in public policy, says the FAO.