Tackle tail painting and save time 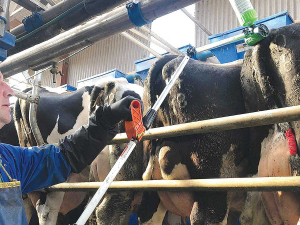 Many farmers use tail painting for heat detection, a task that can be difficult, time consuming and dangerous – the latter particularly so if staff are climbing or reaching over rump rails in the dairy shed during milking.

For effective heat detection from tail painting, the paint needs to be topped up regularly, increasing that risk and labour burden, so the arrival of a new application system should make the task a lot easier.

The Tailpainter was originally launched in Ireland’s dairy market in 2019 and has proved to be extremely successful over the last two European breeding seasons. Trials were done in New Zealand during 2019.

This saw the device tested with herds ranging from 180 to 1050 cows, leading to a planned launch in time for the NZ 2020 breeding season.

The patent pending design features a lightweight telescoping wand that can be extended from 65 to 115cm and can be increased by a further 30cm with an extension piece.

It carries a reservoir and applicator roller. At the operator end, a tough ergonomically designed D-shaped grip makes for ease of use, allowing the lance to be used in an angled, short or long reach configuration for milking shed, cattle crush or feed barrier scenarios respectively.

The system can work with water or oil-based products from all the major suppliers of marker products, although the manufacturer recommends the former, from an environmental and ease of clean-down perspective.