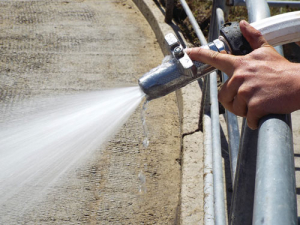 Water remains a hot topic, given the boom-and-bust cycles and the likelihood of restrictions and higher costs for the precious fluid.

Hence the appeal of Numedic’s Hydrofan nozzle: it washes dairy shed yards to high standards but uses less water than is customary.

The Rotorua company shuns conventional design, instead making a nozzle that emits a wide, fan-shaped stream whose high impact shifts muck as all get out.

The stainless steel units have a swivel at the hose tail; they are available in 32 and 38mm sizes to fit existing pipework.

Dairy News visited Waimanu Dairy Ltd at Coldstream, central Canterbury, getting insights on their water use. The farm milks 800 cows through a 54-point rotary shed from a 30m diameter collecting yard with an automated backing gate.

In a four-month trial with ECAN, the owners, Warren and Suzanne Harris and their son Robert, monitored daily usage, discovering the average daily use at the shed and collecting yard was 61.6m3 through washdown hoses in the milking shed and eight hockey style nozzles on the backing gate. It worked in part, but they still needed a twice weekly washdown of the collecting yard, taking one hour to shift the build-up the backing gate nozzles didn’t shift.

Switching to Hydrofan nozzles, and reducing the number from eight to five on the backing gate has markedly improved the efficiency of the cleaning process and cut water usage by about 12m3 per day. This saves 360m3 over a nine-month milking period.

Warren Harris says it has been an eye opener -- 20% less water used for washdown, less dirty water passing to the effluent storage system, less effluent pushed out to the travelling irrigators and a resultant cut in electricity use which at the time of the visit was yet to be quantified.

He comments, “the nozzles might be a little dearer than conventional plastic designs, but they’re proving to be durable. The swivel allows the fan to be used just like a brush and the overall result is it’s cleaner and all the time saves money”.

Numedic, manufacturer and supplier of a wide range of dairy and agricultural products, has changed ownership after 25 years.

Numedic, manufacturer and supplier of a wide range of dairy and agricultural products, has changed ownership after 25 years.

Numedic is now in its 25th year of business under the ownership of Peter and Cathryn Reid.