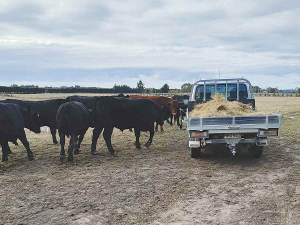 They say that invention comes from adversity.

However, in the case of Canterbury farmer, Kevin Frewer, the catalyst was the frustration of cattle rubbing up against his vehicle during feeding out – a problem he didn’t want to repeat with a new vehicle, following a $2,000 bill to panel beat his old vehicle.

Feeding around 40 cattle on his two blocks, Frewer set about designing a solution – The Stockaway. This comprises of a hot wire that surrounds the vehicle to keep cattle away. The design is collapsible and takes 15 to 20 seconds to re-position for use in the paddock.

The energiser unit is powered from the truck’s cigarette lighter socket, switched on via a remote switch on the upstand of the rear deck.

Frewer says that once stock have received a few ‘belts’ from the hot wire, they no longer congregate against the vehicle and quickly learn to keep their distance. The clever inventor also reports that there are no problems from interference with the vehicles electronic systems and confirms that a separate chassis-mounted earth is complimented by the tyres that also help create a positive grounding.

Positioned around 150mm away from the deck, the device also stops animals pilfering feed or baler twine that might end up on the paddock.

Fitting the unit on the ute only requires four small holes in the front bumper to carry the forward insulators, these can quickly be removed and plugged when the vehicle is moved on.