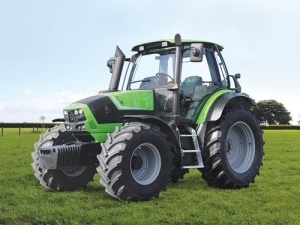 Power Farming introduced a number of new models and upgrades to the Deutz Fahr tractor ranges for the 2016 season.

Power Farming recently introduced a number of new models and upgrades to the Deutz Fahr tractor ranges for the 2016 season.

In the all-important 100-130hp sector, the introduction of the new 5G series will complement the existing 5120 and 5130 models, and offer buyers more choice in an attractively priced package.

The 5105.5 and 5115.4 are 100 and 109hp respectively and the first DF models to use the new Farmotion engine which is built in-house and specifically designed for agricultural work.

The units meet Tier4i emission regulations by using high pressure common rail with fuel injection, and exhaust gas recirculation (EGR) and diesel oxidisation catalyst (DOC), which is said to be a simpler and more effective solution than diesel particulate filter (DPF) and Ad-Blue, and requires no maintenance through its operating life. A heavier engine block is also said to reduce vibrations by up 25% and noise levels by 4%. Coupled to the new motor is a choice of 40 x 40 transmission in the 5105 or 60 x 60 in the 5115, both with wet clutch/power-shuttle and either 2- or 3-speed, on-the-go powershift.

As part of the overall package the tractors are well equipped, using the D2 four post cab, the Stop and Go system – which cuts drive by using only the brake pedal – a true 4-wheel braking system with axle management for the diff lock, and electronic hitch control.

Both models have an open-centre hydraulic system with 55L/min flow, and either two or three remotes as standard. The 5115 also has increased lift capacity at 4855kg – its sibling's maximum is 3600kg – and it has the SDD steering system that engages a second, switchable steering pump to reduce the number of turns of the steering wheel to go from lock to lock.

At the upper end of the stable the well-known Agrotron range now includes the Evolution series, cosmetically upgraded to bring the look of the tractors into line with the higher spec 6 and 7 series; there are some specification changes to the various models.

All models now have mechanical cab suspension; and the M600 Summit EVO has front axle suspension and 50km/h transmission.

Completing the package is a new cost-effective loader option, the Agrilift 4020, made from high grade steel and with mechanical self-levelling, third remote function and shock absorber to lift 1720kg to 4m.