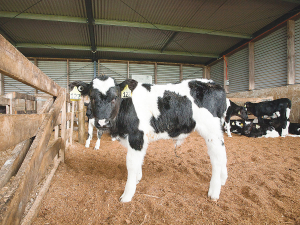 He has been the owner operator of the farm at Rukuhia, 10km south of Hamilton for eight years.

To boost the health of young stock and give them a good start, he has an array of animal management tools at his disposal - feeding them well, looking after them on a daily basis, feeding good colostrums and boosting trace elements.

For trace element supplementation, he used MILTIMIN that comes in the form of an injection containing copper, selenium, zinc and manganese.

Grayling administers the injections himself to stock five times over a two-year period.

"They get the first shot four days after birth, another shot at weaning, one before wintering, one prior to mating and the last one before the next winter," he told Dairy News.

"We can use it on cows but I believe giving them to calves over a two-year period sets them up pretty well for the milking life."

He says it's hard to quanitfy how MILTIMIN works because he hasn't got a control group alongside his herd.

"But it is certainly one of the important tools in our tool box to ensure all young stock have enough trace elements to give them a great start to life.

"For me, preparing calves for their milking life is about having a multi-pronged strategy. Trace element supplementation goes alongsie feeding them well and looking after them daily."

Grayling says he started using the product after it was recommended by a vet and a neighbouring farmers.

Grayling rears all his stock on-farm.

According to Virbac, MULTIMIN is designed to be administered to stock prior to high periods of demand, such as early life, weaning, calving and mating. Each injection contains copper, selenium, zinc and manganese and comes in a chelated formulation that is safe and tissue friendly. It is absorbed into the blood within eight hours and transferred to the liver within 24 hours. MULTIMIN is also scientifically proven in New Zealand conditions. For more information, visit performanceready.co.nz and speak with your vet. It is registered unde the ACVM Act 1997 (No A9374).

The Tailpainter heat detection tool is now complemented by the Daisy Paint tail paint range, which made its debut at the 2021 National Fieldays.

Pondstir living up to its name

The Pondstir from Dannevirke-based Metalform, as its name suggests, is a heavy-duty, shore-based stirrer designed to agitate and incorporate the liquid and solid factions of effluent ponds or storage towers.

Several years ago, Strainrite's Southland rep identified a gap in the market for quality multi-wire break feeding products for sheep and beef farmers.