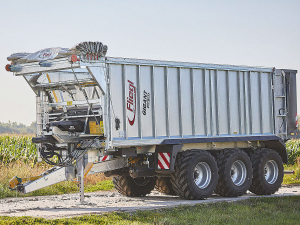 Fliegl is a family-owned company, offering a range of transport solutions including trailers, muck spreaders and slurry tankers.

Power Farming has announced its partnership with Fliegl Agrartechnik of Germany, manufacturers of an innovative, highquality range of trailers, muck spreaders and slurry tankers.

Based to the east of Munich, close to the Austrian border, Fliegl has already seen some success in New Zealand with a previous small-scale importer and a factory backed operation in Otago for the last two years. The move to the Power Farming Group as the importer and distributor is sure to give the brand much greater traction.

Like Power Farming, Fliegl is a family-owned company. It offers a range of transport solutions including trailers, muck spreaders and slurry tankers, the latter the bestseller in the home market.

Of interest is the company’s range of ASW push off trailers that enables up to five times faster unloading and, through compression during loading, up to 60% more capacity depending on the material being carried. Benefits of the system also include a much lower centre of gravity and far greater stability and safety when compared to a conventional tipping trailer. Additionally, the trailers can be used for multitasking, with the standard rear door easily swapped for a grain discharge or muck spreading assembly.

Dedicated ADS muck spreaders, with capacities of 10-20 tonnes, also include push-off technology, ensuring an even feed to the spreading unit, a clean loading area when spreading is complete, while the underfloor remains clean, unlike the conventional scraper floors. As an option, the ADS spreader can be retrofitted with a heavy duty back door to convert the spreader for use as a transport trailer. Fliegl offers a full range of vacuum tank slurry tankers from 8000 to 27,500 litres, configured for splash plate, trailing shoe or direct injection techniques, with options for GPS, proof of placement and quantity data.

“Trailers now provide a realistic alternative, offering greater flexibility, alongside a reduction in soil compaction with the use of large tyre equipment,” says Leigh.

“We have also seen the arrival and uptake of highspeed, high-horsepower tractors, while farm waste and effluent management has become a standalone industry. The extensive Fliegl range provides innovative and versatile solutions that allows us to help farmers meet the mounting demands, particularly as environmental pressures become more onerous”.