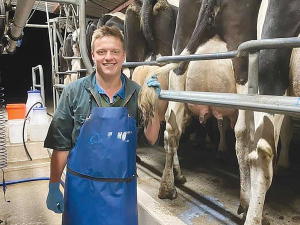 Pete Smit is one of a growing number of young business-savvy New Zealanders seizing opportunities in the dairy sector.

The 22-year-old is in his third season as a herd-owning sharemilker on a 68ha farm at Ohaupo near Hamilton. The property is jointly owned by his mother Nienke Hartog and brother Floyd Smit.

“We have a fairly high-input system, which helps minimise any feed shortages caused by weather events, such as drought,” said Pete.

“Having the infrastructure to fully feed the herd enables me to milk twice-a-day year round and maximise production.”

Pete’s herd averages 630kgMS per cow, which sits well above the Waikato average of 364kgMS per cow.

A feed pad and large feed bunker are situated near the property’s spotless 16-aside herringbone milking shed.

“The farm has heavy peat soils, which can be a challenge to manage, but I’m getting more confident each spring,” he said.

The herd’s diet of pasture is supplemented with home-grown maize silage, grass silage, palm kernel expeller (PKE) and other concentrates.

“We planted 12 hectares of maize last year and the crop yielded 21.7 tonnes per hectare, which was great given the dry summer we had,” said Pete.

Almost half of Pete’s herd calves in the autumn, starting in early March and finishing by ANZAC Day.

The remainder of the herd begins calving in late July.

“As a young 50/50 sharemilker who’s just starting out, it’s been a big advantage for me not having to cull all of my empty cows each year,” he said.

Pete bought the Holstein Friesian herd off his brother Floyd in 2018.

“Most of the cows were descendants of pedigree animals from my parents’ Hibi Holsteins herd,” he said.

“There’s a strong influence of genetics from Waipiri Holsteins in there as well.”

With the milk payout forecast to drop from last season’s estimated $7.15/kgMS to as low as $5.90/kgMS this season, Pete has his eye on his budgets.

“Extra supplement is only bought in at the right price,” he said.

“My focus for the next couple of seasons is on debt reduction and trying to manage my business’s cashflow in these uncertain times.”

Pete hopes to progress to a larger 50/50 sharemilking position within the next five to ten years.

“Long term, I’d like to own a dairy farm, but that’s likely to be through an equity partnership,” he said.

He does his own artificial insemination and this season will do all AI and use no bulls for the first time.

“My in-calf results have been quite good recently, so I decided to back myself and do away with having bulls as a back-up,” he said.

“I use a mix of New Zealand and overseas genetics over the herd. I focus on trying to breed animals with lots of capacity, good management traits and high components,” he said.

Pete enjoys assessing the structural traits of dairy animals entered in livestock shows and has been an associate judge for several years.

He was recently awarded the coveted Frank Pfister Trophy for being the highest-scoring youth member at a Holstein Friesian NZ judging school.

“It was a bit of a shock. I thought I did well on the day, most of my placings were in line with the over judges,” he said.

“But judging dairy cattle is quite subjective, there is often no right or wrong answer.”

The result has seen Pete graduate to the senior judges’ list, meaning he will be able to judge on his own at A&P Shows this summer.