Southland and Otago merge for awards 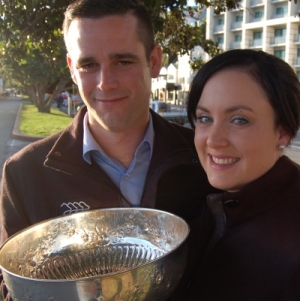 The 2014 New Zealand Dairy Industry Awards will take place in 11 regions, including a merged Southland/Otago region.

National convenor Chris Keeping says organisers made the decision to merge the Southland and Otago regions in late July as it is believed that the merged region will be stronger, creating a better competition for entrants.

"The executive committee has deliberated on the future of the regions for some time, and came to its decision on the basis that it is most important that entrants are guaranteed a competition and the opportunity to compete in the national finals," Keeping says.

Disappointing entries forced the Otago region to revamp its contest this year with only Otago's Dairy Trainee of the Year winner progressing to the national final. Keeping says organisers wanted to prevent a similar fate recurring.

New Southland/Otago regional committee chair Helen Hartshorne says the committee is happy to be organising an awards that will be successful.

"It is going to be very satisfying convening these awards as we know we will convene a great competition and have a great event at the end of it."

Keeping says the 2014 Southland/Otago region will be chaired by Hartshorne and have two sub-committees, each with convenors and representing the two pre-merged regions.

All entrants in the merged region will take part in preliminary judging to determine the six finalists in each competition. A final round of judging will then determine the winners. It is anticipated the 2014 Southland/Otago Dairy Industry Awards winners will be announced at an awards function in Gore on March 1, 2014.

Visit www.dairyindustryawards.co.nz for more information on the awards programme.