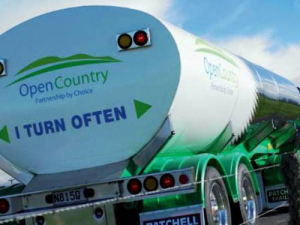 Open Country Dairy is the first anchor tenant in the Ports of Auckland (PoAL) regional freight hub that formally opened on April 30 at Northgate Business Park at Horotiu just north of Hamilton.

OCD’s Horotiu milk processing plant has been running at full capacity since August 2018. Now it adds a loading area, pallet store and a 7000 sq.m high-stud warehouse.

PoAL also has freight hubs in Manawatu, Bay of Plenty and South Auckland.

The Horotiu hub is adjacent to the Waikato Expressway and the North Island rail line. The ‘port’ was opened by Transport Minister Phil Twyford, who called the facility “an exciting commitment to the country’s freight supply chain, at the heart of the golden triangle of Auckland, Hamilton and Tauranga”.

Equidistant from New Zealand’s two largest ports of Auckland and Tauranga, the 33ha site is expected to benefit from half the economic and population growth in NZ during the next 50 years.

Rail sidings will be built there in 24 - 36 months, and overall the site is expected to help reduce freight costs, road deaths and carbon emissions.

Tony Gibson, the chief executive of Ports of Auckland said the hub’s location will provide tangible benefits for importers and exporters, not least by optimising container usage and reducing the number of empty containers on NZ roads.

Meanwhile, on the eastern side of Hamilton, the Tainui Group Holdings’ slow-moving 48ha Ruakura development (logistics, industrial, commercial, retail and residential) has had its first 6ha levelled and work started on water infrastructure and drainage.

Chief executive Chris Joblin told Rural News Group that the key priority for 2019 will be reaching agreement with local and central government about the costs and timing of the road link between the inland port, Hamilton City centre and the adjacent Waikato Expressway to the east of the site.

He said enquiry about industrial space is particularly strong, especially from Auckland, where development space is limited.

He said Ruakura will eventually offer about 10% of the industrial space on offer in NZ. He said the business will see a wave of demand for space in the next three to five years, while the fuller exploitation of the vast site will be an inter-generational project taking 30 to 50 years.

The country’s second-largest milk processor is warning its suppliers to expect lower milk prices in the months ahead as milk supply around the world increases.

NZ’s second-biggest dairy processing company says it is taking a pragmatic and cautious approach, as it deals with the impact of COVID-19.