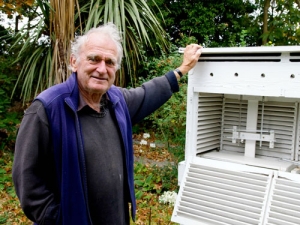 His comments are a response to a payout forecast of $9.20 for organic milksolids, more than double the price of conventional milk, which he believes has the potential to take New Zealand back to being a world leader in organics.

He laments New Zealand letting its status as a frontrunner in organics slide. "At one time we were one of the top certified organic nations in the world. Now we're almost insignificant in the global picture," says Crowder.

He puts this down to a cheap food mentality with no thought for quality or origin, which means organics have not advanced as far as he thought they would when, as a senior horticulture lecturer at Lincoln University (then College), he established the Biological Husbandry Unit (BHU) in 1976.

Although Crowder was looking for 'another way of doing things' he says much of the impetus came from students who wanted a more practical degree with a focus on sustainability and organics. The so-called 'Sandwich Degree' introduced to Lincoln in 1978 for horticulture students were critical to the success of the BHU as it allowed students to work on the site as part of their studies.

"Students in the 1970's were very radical. They weren't forced to be organic. What we were doing had to be integrated into the general teaching. The BHU was for the teaching and demonstration of holistic environmental aspects. It was based on good scientific principles, not muck and mystery."

The BHU is celebrating 40 years of organic status this year. It has grown from an area for teaching and demonstration based on a holistic organic philosophy and historic research, to a charitable trust which now incorporates a Training College, the Future Farming Centre and the BHU Farm.

Crowder acknowledges the hard work put in by volunteers and students, some through the WWOOF scheme (Willing Workers on Organic Farms), saying the BHU would not exist without their contribution. "Our research and the students we taught were the foundation for the future of organics in New Zealand. We produced some really excellent students of organic philosophy who are today leading the organic movement. "

After Crowder's retirement at the end of the 1990s, and a brief hiatus in which the future of the BHU was uncertain, it was re-launched in 2001 as the BHU Organics Trust, a joint venture between Lincoln University and the New Zealand Organic Movement, dedicated to providing education, training and research in organic, ecological, permanent and related agricultures and horticultures.

Crowder still teaches at the BHU, mainly on its history, and is active as a mentor for organic growers.

The BHU has community gardens to encourage members of the community to grow their own organic food on a certified organic farm in a supportive environment of like-minded gardeners.

Mr Crowder says he is impressed with the number of communal gardening schemes that have taken off in Christchurch since the earthquakes, but worries that they are fragmented.

"People here have become aware of food security issues and more are growing their own produce. Opportunities in the central city are unparalleled elsewhere in New Zealand. But there are lots of individual schemes. People need to pool their resources. The key is to have paid people who organise things and keep the enthusiasm going."

A bill aiming to create a national standard for organic products will be considered by Parliament.