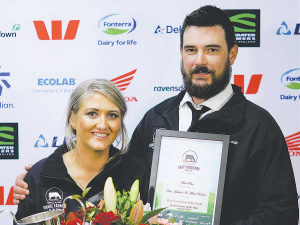 Sian Madden and Mark Roberts, West Coast/Top of the South Share Farmer of the Year winners.

First time entrants, Sian Madden and Mark Roberts were recently named winners of the Share Farmer of the Year category at this month's West Coast/Top of the South Dairy Industry Awards.

The couple are contract milkers and 20% sharemilkers on Stu and Jan Moir's farms in Reefton, milkig 1,300 cows across the Moirs' two properties.

"It's an amazing achievement and we're both incredibly proud of ourselves and our team around us," she says.

The couple formed Madden Roberts Farming in 2019. The pair took on their first contract in that year and within six months were offered the opportunity to take on a second farm.

Madden says that while her partner grew up around sharemilking and the dairy industry - his parents were sharemilkers - the same cannot be said for herself.

"I only set foot on a dairy farm when I met Mark, so I come from a completely different background."

Madden says one of the challenges the couple have faced is the location.

"It's a fairly different remote climate and we're adapting to the lifestyle... and now we love it," she says.

Madden says that a personal challenge for her was learning the language specific to the dairy industry.

She says the pair play to their strengths within the business.

Looking to the future, Madden says the couple aim to own their own farm.

"We are working towards farm ownership and know what we need to get there."

Other winners at the West Coast/Top of the South Island Dairy Industry include Rachael Lind (Dairy Manager of the Year) and Sam Smithers (Dairy Trainee of the Year).

The West Coast/Top of the South Dairy Industry Awards winners field day will be held on April 7 in Reefton.

A former placegetter in the Canterbury/North Otago region Dairy Industry Awards has come back to take out the top title this year.

The 2021 Auckland/Hauraki dairy manager of the year Stephanie Walker says the dairy industry awards competition has provided her with invaluable networking.

A former police officer has taken out the 2021 Northland Dairy Industry Awards Share Farmer of the Year title.