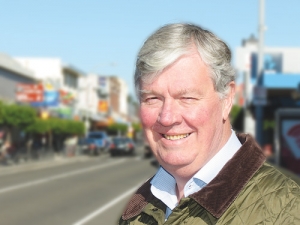 The mayor of a district where dairying is a big part of the local economy says he's starting to see problems resulting from the downturn.

Roly Ellis is mayor of the Tararua District with four major rural towns: Dannevirke in the north, and Woodville, Pahiatua and Eketahuna in the south. Fonterra has a large factory at Pahiatua. Tararua District towns also have farming related businesses such as agricultural machinery.

Ellis says the area's 350-odd dairy farms account for much of the money circulating in Tararua, including the farms' cashflows and those of the businesses that service the farms.

But the downturn has changed this, he says. While the district is not big in the national scheme of things – about 3% of NZ's cows graze the region versus 34% in Waikato -- towns such as Dannevirke are dairy dependent.

"Dairy farmers aren't spending huge amounts in shops or the agricultural service businesses. I walk the towns about every three months to find out what's going on and talk to the shopkeepers and agri service businesses. I have been a farmer myself and was a rural drought coordinator here between 2007 and 2010 and I'm a trustee of a big farming enterprise so I keep my ear very much to the ground."

Ellis has not so far heard of any dairy farmers forced to sell up but he and his council are closely watching what's happening. His biggest worry is the predicament of sharemilkers, especially lower order ones. They are vulnerable and it's with them that some of the problems are now showing up.

"What has happened all over the world -- and I have seen this in Britain where I have farmed -- is that you go through the highs and lows and when you get highs everyone gets wonderful ideas about what it's going to be.

"In fact the dairy farmers haven't had a check like this for years and years and they have suddenly realised they now have to become more efficient. Efficiencies are going to come in, I am absolutely sure of that. People who have been spending liberally until now are suddenly facing this check in what they can do."

Ellis says this has happened in the sheep and beef sector and farmers now better understand where the dollar has to be spent. It hurts like hell but farmers then go on to look at different ways of running their businesses.

The GlobalDairyTrade Event 173 concluded with the GDT Price Index down 3% over night.

Farmers get the lot

Fonterra has for the first time passed all its forecast milk price rise to its cash-strapped farmer suppliers.