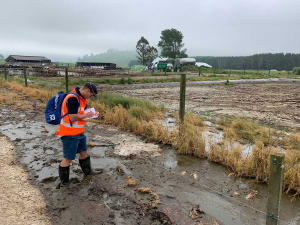 Council officer noting scale of overflow of effluent from feed pad on a farm at Oruanui, north of Taupō.

A Taupō-based farming company, a company director and an effluent spreading company have been convicted and fined a total of $194,250 for unlawfully discharging animal effluent into the environment from three large dairy farming operations.

The sentence was imposed recently by Judge Jeff Smith in Tokoroa District Court and follows repeated unlawful discharges of animal effluent between 7 November 2019 and 2 March 2020.

“Clearly, this is not the case here. It is fair to say that both the regulator and the wider dairy industry are very disappointed with the breaches uncovered across this substantial farming enterprise.”

Gardon Limited ran an 1150 cow dairy operation at Oranui, north of Taupō, that employed a number of staff. However, the farm was managed by company director Gerard Logan Donald.

Waikato Regional Council staff carried out a monitoring inspection at the farm on 26 November 2019. They found an effluent irrigation hydrant had been discharging dairy shed effluent over a prolonged period of time which was ponding near the hydrant. As well, a travelling irrigator operating earlier the same day had been over-irrigating effluent onto already wet soils, resulting in further ponding of effluent in breach of Waikato Regional Plan rules.

An abatement notice was issued to the company requiring it to cease any further unlawful discharges of effluent.

At a follow up inspection by council staff on 2 March 2020, a buried pipe carrying dairy shed effluent to a sump was found to have had an inspection hole cut in it. This had not been resealed, resulting in the pipe discharging effluent over a prolonged period of time, causing effluent ponding in a paddock below the pipe, again in breach of Waikato Regional Plan rules and in contravention of the abatement notice.

The company was convicted of two charges of unlawfully discharging a contaminant into the environment and a further charge of contravening an abatement notice and was fined a total of $101,250.

Donald is also a director and shareholder of another company which owns two adjacent dairy farms. He was employed through his company, Gardon Limited, as the general manager responsible for the overall management of these two farms.

Council staff inspected the first of these farms, which milks approximately 1750 cows, on 7 November 2019 and found the unlined effluent storage pond to take effluent from the feed pad was overflowing with effluent flowing down through a stormwater retention pond into a sink hole in the ground.

A follow up inspection on 21 November 2019 found that effluent was still flowing into the sink hole, despite directions from council staff to clean the effluent away and prevent further discharges.

Donald was convicted on a charge of unlawfully discharging contaminant into the environment and fined $35,000.

On 26 November 2019, contracting company The Effluent Pumping System Limited (EPSL) was at the farm pumping out one of the farm effluent storage ponds using a large portable pump and tractor mounted irrigator. Council staff found that EPSL staff had over-applied effluent over a large area causing a significant ponding and runoff of effluent.

EPSL was convicted of one charge of unlawfully discharging a contaminant into the environment and fined $30,000.

Council staff also inspected the second Gardon farm, which milked 1,600 cows, on 21 November 2019. They found the effluent sumps at two stock underpasses under State Highway 1 and Tram Road were overflowing into unsealed catchpits, in breach of Waikato Regional Plan rules. In addition, council staff found that dairy shed effluent irrigated from three stationary irrigators had caused the significant ponding of effluent over large areas in an undulating paddock.

Donald was further convicted on a charge representative of the unlawful discharges and was fined $28,000.

A Matamata truck wash business and a Hauraki farmer have both been convicted and fined over separate pollution events resulting from poor management of effluent infrastructure.

OPINION: With winter not too far away, this is the time for planning for tree planting.

Compliance, monitoring and enforcement data released by Waikato Regional Council for 2019/20 show that 21 environmental prosecutions were completed over 12 months, with 42 convictions against 23 polluters.

A large dairy farming operation, linked to Fonterra chairman Peter McBride, has been fined $47,000 for an effluent management breach.