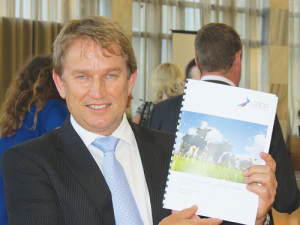 New Zealand could be $1.3 billion better off if all tariffs on our dairy exports were lifted, according to an economic report on the NZ dairy industry.

Commissioned by the Dairy Companies Association of NZ (DCANZ) and prepared by the NZ Institute of Economic Research (NZIER), the reports sets out the massive contribution the dairy industry makes to NZ’s national and regional economies.

It notes that the industry contributes $7.8b or 3.5% to NZ’s GDP, employs 40,000 people on farms and processing facilities and in three areas, Southland, Waimate and Otorohanga, provides one in five jobs. In Matamata-Piako, South Taranaki, Hauraki, Waipa, South Waikato, Clutha and Kaipara the industry provides one in 10 jobs.

The report also shows the contribution dairy farmers make to the general economy, noting that they are spending just over $12.2b on a range of goods and services in their communities to support their operations.

DCANZ chairman Malcom Bailey says the report was commissioned because some people are questioning the importance of the dairy sector to the NZ economy given a couple of years of lower prices and a volatile international market combined with a move away from trade liberalisation. The report was launched at a function at parliament last week before an audience of primary sector representatives, diplomats and government officials.

“The report is aimed at informing the people of NZ about the sector and fostering support for greater trade liberalisation. If we can get trade barriers removed, there is a big prize awaiting NZ. Trade barriers are supressing the value of our dairy exports. Removing trade barriers will allow New Zealand’s dairy sector, ultimately, to maintain and build sustainability and value-adding momentum,” says Bailey.

One challenge, Bailey admits, is getting the message to the wider public about the positive things the industry is doing, e.g. farmers’ huge spending on sustainability on their farms.

“We are in much better shape than we were ten years ago but I am not sure we are getting the credit for that.

“I can assure you the farming sector and the dairy processors are totally on board which we think are the views of wider NZ in that we want to have our environment in better shape.

“Good communication is the key, but of course we live in a society where getting people’s attention is not always easy and a social media story which is off the mark, capture their attention.”

Primary Industry Minister Nathan Guy praised the investment dairy farmers have made in sustainability and he noted the huge importance of dairying to the regions.

John Ballingall, who co-authored the report, says that in the five years since they did the last report, the dairy sector has continued to grow its employment and exports.

A positive trend is the greater degree of diversification and value add products, “such as ice creams and infant formula – a diversification from basic commodities -- is very encouraging.

He noted there are now 1800 jobs in the dairy processing industry in Auckland. “I’m not sure many Aucklanders would know that.”