Time to focus on breeding goals 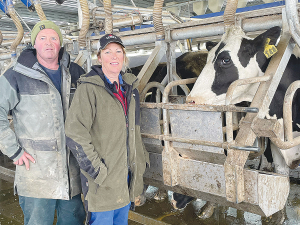 Otorohanga dairy farmer Mark Sanson admits he gets cow envy when he drives past the Waikato farm of a fellow Holstein Friesian breeder - but it won't be long until his own herd is the subject of many in admiring glance.

Milking 440 cows on 280ha in South Waikato, Mark and wife Jann own Longridge Farm, a family farm that was originally 84ha.

"We have purchased cows over the years as we have grown which has slowed the achievements of our breeding goals, but it has been necessary to get the cow numbers we need," Mark says.

"Now is the time that we can really focusing on achieving our breeding objectives."

Mark's parents purchased the farm from his grandparents in 1974; Mark worked on the farm after he finished school and started sharemilking for his parents in 2000.

"When I started sharemilking, I bought the cows from Mum and Dad, which were Ambreed and Wrightson Breeding Services," he says.

"It was a first-cross Friesian herd."

Mark and Jann then purchased the 107ha farm from his parents in 2013, adding more parcels of land to the farm over time.

"When Fonterra shares peaked, we sold the shares and went to Open Country Dairy, which proved to be a great move," Mark says. "We were able to purchase a 70ha runoff three kilometres up the road to run our young stock, and the following year we purchased the neighbouring property of 45ha which we had been leasing.

"Today, we also lease 64ha of family land alongside out own dairy platform."

The Sansons employ one fulltime staff member and one relief milker. Jann also works on farm in addition to her work in an accountant's office.

The farm is system 4, with the feed pad operational for around nine months of the year.

Mark and Jann grow 40ha of maize on farm annually which allows them to 50/50 split calve in autumn and spring. By split calving they can take advantage of the winter milk premium offered by Open Country Dairy; it also means that any cows that don't get in calf the first time get a 'second chance' when mating comes around again.

"If they don't get in calf, the big cows just keep on milking," Mark says.l

"We're not sending anything to the works."

The Sansons currently rear 100 replacements annually and rear all bulls and beef to sell.

While heifers are mated to low-birthweight Hereford bulls, the rest of the herd is bred with a focus on Holstein Friesian breeding objectives.

Mark's goal is to have purebred Holstein Friesians from American bloodlines, and is using Semex and World Wide Sires bulls to achieve this.

However, the backbone of the herd is Mainstream Manifold.

"David Mayo from Semex advised us to use Mainstream Manifold until we could no more, which has proved to be great advice," Mark says.

"Some of these cows peak at 50 litres/day each year; one Manifold daughter peaked at an average of 54 litres over eight days."

Average production across the herd is 500kgMS/cow, and in addition to type and temperament, the Sansons prioritise good feet and udder traits.

Despite there being some river flats on farm - the 64ha leased from Mark's family - the ows have some way to walk, with cow races running along the farm's ridgelines.

"The farm is quite rolling to steep farmland, and it is one kilometre from one end of the boundary to the cowshed," Mark says.

"We have had issues in the past with cows losing udder strength," Mark says. "Thankfully we have managed to improve that trait over time and all our young cows have been lasting. If you feed them well, you want them to put the milk out the other end in litres."

Mark and Jann's big cows are performing so well as their preferred 'type' that they have had to replace their dairy.

"The farm had a 30-bail rotary dairy, but the cows were too big for it - they kept breaking the drives underneath," Mark says.

"We went to a DeLaval 24-a-side parallel dairy; which is highly automated: it monitors litres as the cows go through the shed, it has auto-drafting; it monitors everything on the cow.

It also has an auto-feed function whereby meal is distributed to cows based off the litres of milk they producer, via EID."

Mark says their aim is to keep paying down debt to eventually become debt-free, while continuing to achieve their breeding goals.

"When I look in the paddock, I like to see good, big cows," he says.

"When we drive past Waipiri Holsteins I think man, I wish our cows looked like their cows; but happily, we are now seeing cows like that.

"The young stock is definitely demonstrating the improvement in breeding coming through."

The power of beef genetics

Now into its seventh year, the Beef+Lamb New Zealand (B+LNZ) Genetics Dairy Beef Progeny Test (DBPT) continues to create value for both the beef industry and the dairy industry, by identifying and enabling the widespread use of superior bulls for use over dairy cows.

Using DNA to identify the unique make-up of a dairy cow will become an increasingly powerful tool for dairy farmers as they look to fast-track the genetic gain of their herds, says new CRV myDNA product manager Anna Morrow.

With pressure growing on the farming industry to minimise wastage, reduce omissions and develop sustainable practices, many dairy farmers are now proactively looking for opportunities to optimise their herd and derive complementary income through involvement in a dairy beef value chain, says First Light Wagyu.