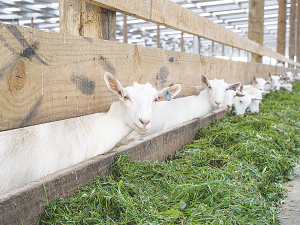 When people think of liver function, they usually have a very vague concept around the filtering and cleansing of blood.

The liver performs this particular function, but it also does many other things. The liver is one of the most complex of all the body's organs, and it is no different when it comes to goats.

Performing numerous important functions for the body, below we have listed just a few of the more key functions of the liver.

Key functions of the liver:

These are just a few of the key processes of the liver. They are significant in controlling health and energy levels in the body. Moreover, each process is reliant on a healthy and fully functional liver.

One of the most overlooked roles of the liver is the fact that it is the single most important organ for metabolising, releasing, and controlling energy production. Energy production of course happens at the cell level.

The liver could be considered a gatekeeper between the body and the environment. Even with the best diet, this organ works constantly to ensure the body has sufficient energy, while at the same time ensuring toxins are excluded as much as possible from other key organs and tissues. The liver suffers the stress connected to its job of detoxifying and eliminating toxins and free radicals produced as a byproduct of energy production, as well as feed-based toxins and manmade chemical toxins.

As this organ plays such a key role in energy production, it’s no surprise that metabolic diseases such as ketosis in ruminants can be so affected by poor liver function. Over-conditioning goats during the previous lactation, and during the period leading up to kidding is particularly problematic. Issues that ultimately lead to fatty liver disease can often go unnoticed in goats until it’s too late.

For instance, a goat that is fully fed for production throughout the last lactation can easily become over-fat leading up to kidding. As the majority of the fat on a goat is internally stored, it may go unnoticed until it is too late. Over conditioning of goats has become such an issue that some overseas goat farmers have even resorted to milking their goats right through to the next kidding in order to keep condition levels in check.

A healthy liver is all about balance

Like the rest of the body, the liver requires a number of key nutrients to function at an optimal level. The liver is unique among body organs in that it has capacity to regenerate cells, particularly when under challenge. Even when a liver is functioning normally, some liver cell damage will be constantly occurring.

Magnesium – helps with release of toxins in the blood allowing the liver to do its job more effectively.

Copper – involved in anti-oxidation, reducing byproducts of energy metabolism, one of the most important functions of the liver.

Zinc – plays a role in liver health through the regeneration of cells, as well as in anti-oxidation.

Selenium – along with iodine, is involved in thyroid hormone production, as well as cell regeneration.

Iodine – production of thyroid hormones, the liver is important in further synthesising these hormones.

Of course, many other vitamins and minerals will be important, but most should be present in the diet in sufficient quantity.

The amino acids (methionine, choline and betaine), along with vitamins B12 and folate have been shown to have a positive effect on fatty liver disease in both humans and animals. A number of studies have shown that feeding higher levels of methionine, choline, betaine, and B12 can increase energy levels, support reproduction, and help mediate the effects of fatty liver disease in ruminants.

In the body these amino acids are normally supplied and absorbed from bypass protein. Bacteria that have digested crude protein within the rumen, and then themselves been destroyed by the abomasum, are digested in the intestinal system. Simply supplying additional amino acids to the rumen is very inefficient, because rumen bacteria will digest them and convert them to ammonia – meaning only very small amounts of these amino acids will ever reach the intestine intact.

When supplementing a ruminant with amino acids in order to insure they reach the intestine intact, they must be fed in a protected form. The best form of protection is to encapsulate the amino acids in rumen-stable fat coating, as this coating is robust enough to withstand the harsh rumen environment. Once in the intestine, the fat coating is quickly broken down and the amino acid is absorbed to the blood and carried to the liver.

Heat stress in dairy cattle is probably the most overlooked seasonal problem here in New Zealand.